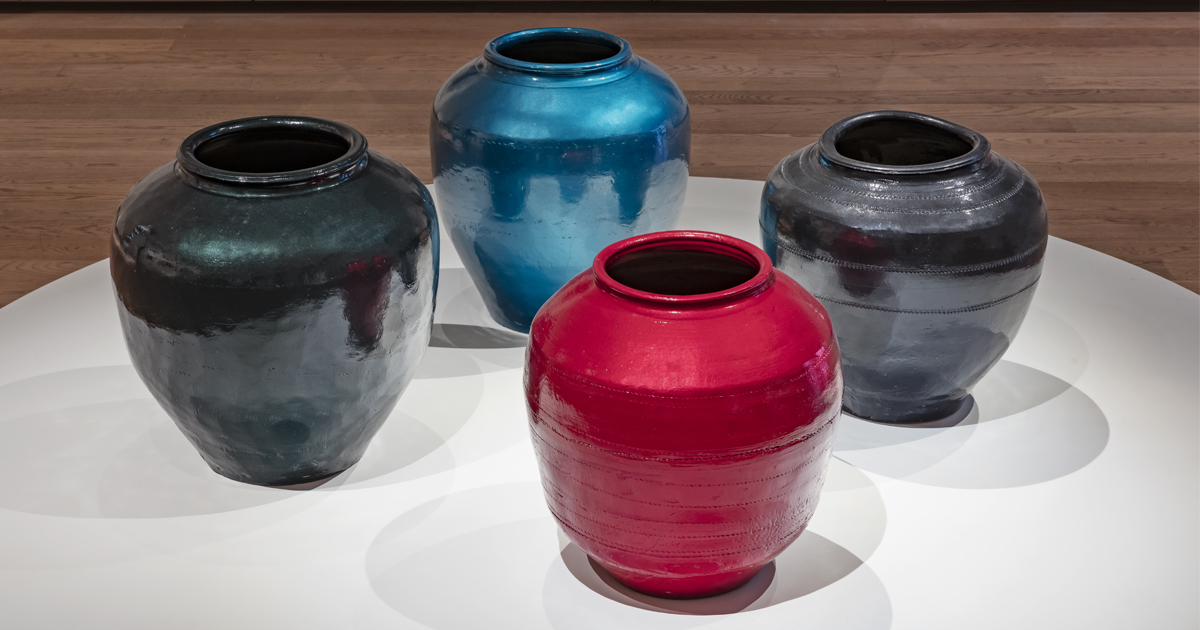 As part of the Ai Weiwei: Unbroken publication, we invited curator and artist Henry Heng Lu to respond to Ai Weiwei’s Han Dynasty Vases with Auto Paint, 2015. You can find the interactive publication, which aims to document the exhibition while connecting its themes to Canadian voices and experiences, at the Gardiner Shop or online.

“I don’t think you felt there was anyone else in the world like you.”
— Fred Wah, Waiting for Saskatchewan

When these ancient urns are destroyed by being coated in automotive paint, they become the embodiment of something rather unsettling, yet so familiar. They are branded and rebirthed with one new character, despite the difference in their colours. They now seem to bear the symbol of a certain cultural specificity, but also an invented, intricate authenticity reinforced by the act of destruction itself. And we, especially you, are all complicit, simply by the act of watching, as an outsider.

Taking a metonymic approach, Han Dynasty Urns with Auto Paint further traces histories and traumas, as well as hybridized identities, with these camouflaged vases on display as entities that are seemingly static but also produce subjectivities. The fake becomes the real, while the real is a lost cause.

When given a new exterior, how does someone camouflage their own state of being? When our experiences as Chinese Canadians get conflated and turn into a few sentences on some political agenda, how do our sensibilities manifest in culturally unbalanced and disconnected spaces? How do we identify ourselves with a cultural consciousness that has been directly linked only to a land across the ocean?

Henry Heng Lu is a curator and artist based in Toronto. He is interested in fostering dialogues that engage multigenerational artistic practices in a cross-cultural context.