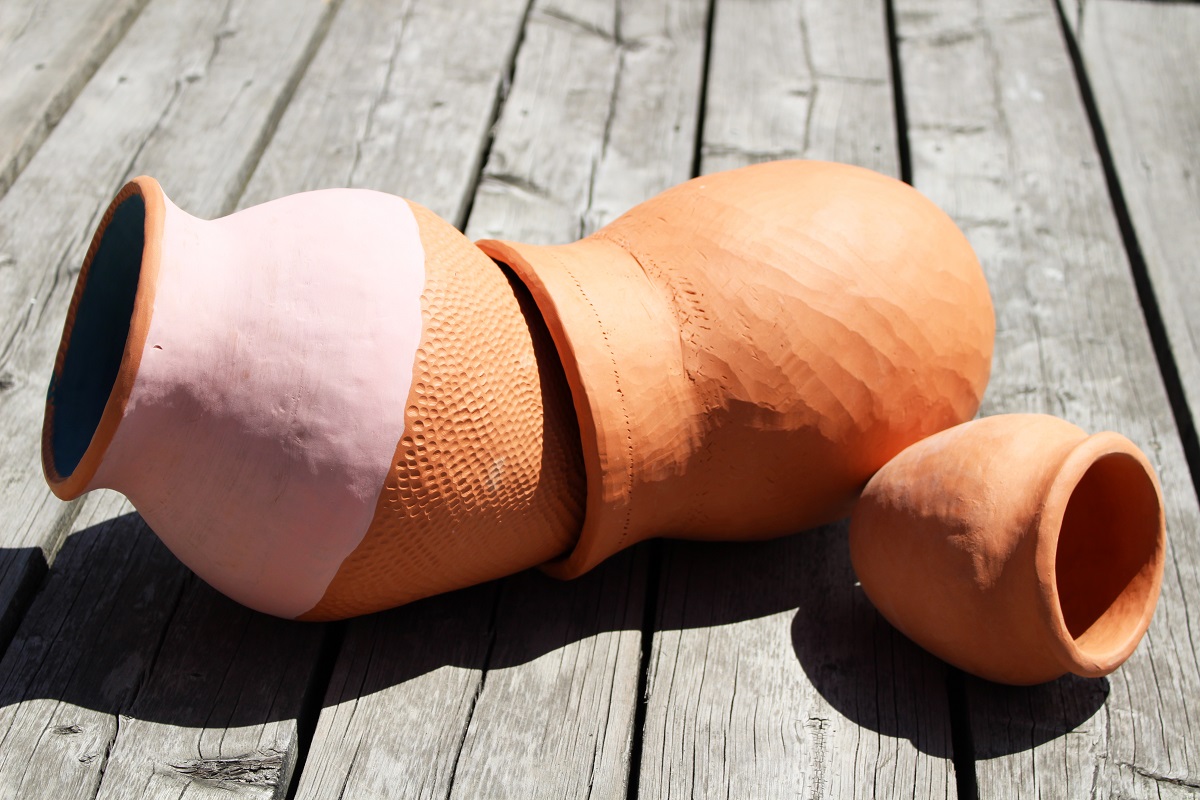 Every time I go to a thrift store, I take time to search through the flotsam of insufficiently loved, abandoned kitchenware for anything made by hand. I’ve brought home turned wood bowls and finger-woven placemats, but pottery—heavy, speckled pieces of fired clay that vibrate with the energy of the fingers that formed them—is my one true love. Each time I acquire a new friend, I wonder at my good fortune. How could this just be sitting here as if it’s the same as the scuffed aluminum pie plate beside it!?

I perform these small rescues because I love beautiful things, but also because the objects we shape with our hands are important. No matter where they go, they carry something of their makers with them—the potter who wished to create something that would be loved for its beauty, but also its utility. And that’s why I try not to leave those handmade treasures alone on their dusty shelves. Like each and every one of us, those vessels call out and say: Pick me up. Hold me. Fill me. I want to be useful. 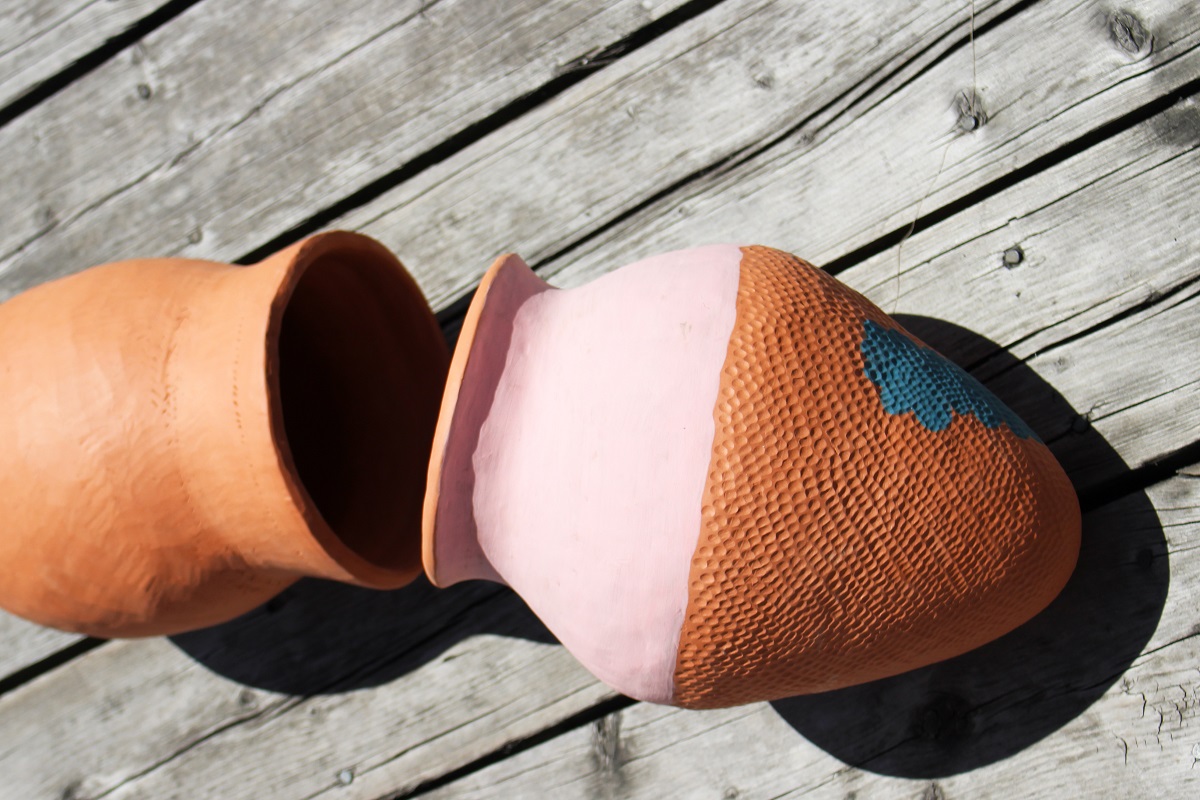 When I asked Louis Esmé (Mi’kmaq, Acadian, Irish) if the pots in their upcoming exhibition, Maldewin Weskijinu / Blood Soaked, are meant to be seen as useful objects, they said: “They’re very much functional pots, in that they are doing something for my internal landscapes, waking something up inside of me that is very old and very subtle. Having this oldness with me, to make new things with—this is a kind of functionality that’s needed right now.”

This framing of the concept of usefulness as an internal imperative seems like a radical shift for Esmé, who over the years has consistently managed to be at the centre of the burgeoning young Two-Spirit1 community in Toronto.

Of course, it isn’t an accident that they are at the centre—Esmé is standing there because they are actively building the community they want to see. In addition to working tirelessly in community arts, activism, and as an educator, Esmé is the cofounder of Titiesg Wîcinímintôwak Bluejays Dancing Together Collective, which holds events that bring Two Spirited people together to make and show art, develop skills, and create vital social networks. They have poured years of sustained love and energy into creating a space for themselves, and so many others to step into.

Now, for the first time, Esmé is stepping out on their own—sort of. When I first met with them at their studio in early July, they spoke of Maldewin Weskijinu / Blood Soaked Soil as the first time that they would be making a large public statement on their own as an artist. After such a long time making artworks that were directly collaborative, or expressly in support of the community, they felt some nervousness about stepping out alone.

I understand Esmé’s discomfort. After all, most solo exhibitions are designed to celebrate the artist as a lone hero; someone to be lauded or denounced, depending on the success of the work and the whim of the viewer. For galleries and museums, a show is a capitalist colonial exercise—a flag planted in the ground, a taking of space. A declaration of territory. Those acts can be powerful and transformative, but they can also be damaging.

Except, for Esmé, it doesn’t need to be. If territory is being declared, they are going to make it about all of us; if space is being taken, it is going to be filled with community. Ekosi. Certainly, the majority of the work in Maldewin Weskijinu / Blood Soaked Soil was created by Esmé, but if their work is going to be given a platform, Esmé is going to make sure that the rest of the community is lifted up too. In addition to showing a body of work that features conical vessels that reference ancestral Wabanaki forms, Esmé has invited a group of artists, including Christa Couture, Jeremy Dutcher, Ashley Bomberry, Shane H. Camastro, Seeds & Stardust, Jodi Lynn Maracle, and JL Whitecrow, to create and show work that responds to the pots they have created.

“How do we acknowledge these realities we are continuously inheriting?” Esmé responded when I asked why it felt important to bring others into their first big show. “How do we say an absolutely huge NO to the colonial realities facing Indigenous youth, while at the same time building them up so they are leading this necessary transformation? As Indigenous people, we need to find a buddy, or two, or however many are needed to reclaim these spaces because we all know what’s actually going on here.” 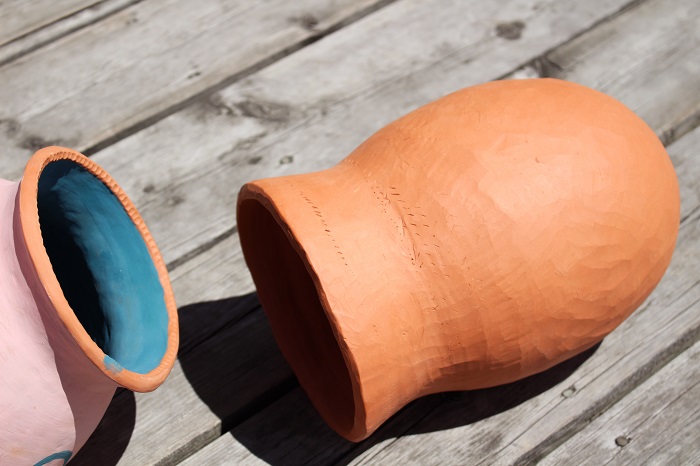 When I was in Esmé’s studio, I got a moment alone to explore the pots for Maldewin Weskijinu / Blood Soaked Soil that they had gathered together on a table. The work is wonderful. As a lover of pottery, I reveled in the gorgeous interior glazing, and as an Indigenous artist who understands the spiritual power involved in reclamation, I was fascinated by Esmé’s exploration of a traditional form that was new to me.

We spoke about the traditional patterning on the pots, which may reference shark teeth or fir, although the specific origin isn’t known for certain. This small mystery brings up questions about the gaps between the knowledge that has been passed down, and the ways that blood-memory and the inventiveness of our artists might fill it. Esmé marvels at how they seem to know how to work the clay in ways that go beyond what they were taught, as though their hands were born with knowledge of their own.

After talking about the work, Esmé brought an unfinished pot down from a shelf where it had been curing. When the layer of plastic was pulled back, I was hit with that old, familiar smell of wet clay—sharp minerals and something far older than the city we stood in. Esmé showed me how they worked the coils after curing, smoothing the edges into their final shape.

I was thinking about how magical it feels to watch an artist at work when Esmé invited me to work the coils alongside them. I uncertainly pressed the surface with my thumb, making my own marks on Esmé’s work and wondering at the generosity of the invitation to participate—what if I messed it up? What if I wreck what they’re trying to do? But of course, that was impossible. Impossible because what Esmé wants is for us to join in, to make messes and build something together.

With one gesture, they revealed themselves. Esmé is a masterful artist on the verge of their first show, but more than that, they are the rarest kind of artist: one who is a tireless builder of community, whose instinct is always to call more of us into the circle so that we might all be stronger, braver, and kinder together.

1 I use this knowing that Two-Spirit is a woefully inadequate pan-Indian term that can never hope to encompass the breadth of gloriously Indigenous TLGBTQIA people. However, the term also has the ability to bring us all under the same roof for the moment, so until we can reclaim all of the words in our own languages and create new ones, it will have to do.