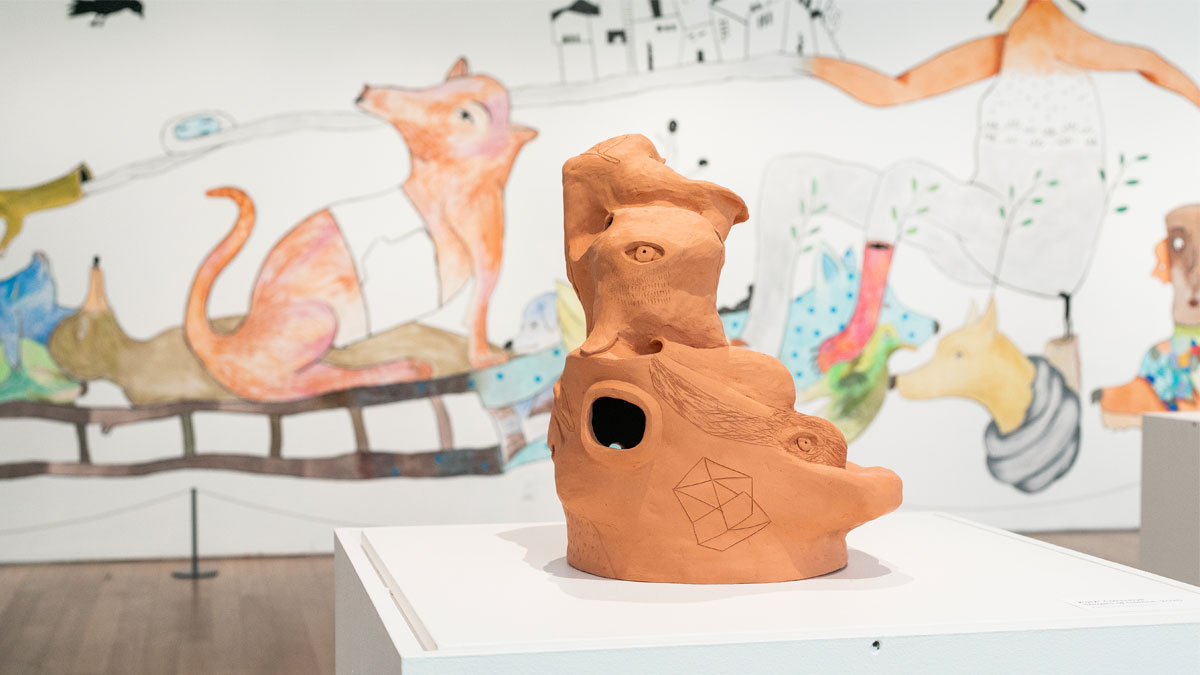 The Gardiner Museum’s Community Arts Space is a series of collaborations with community partners and local artists rooted in the real and metaphorical ability of clay to transform. This year’s featured project is led by Z’otz* Collective (Nahúm Flores, Erik Jerezano, and Ilyana Martínez).

Since 2004, Z’otz* Collective has been working across various media, including drawing, painting, collage, sculpture, and site-specific installations. The collective’s name derives from the Mayan word for bat, an animal associated with vision, dreaming, and intuition in Mayan culture. Their work riffs off this association by creating whimsical figures in dreamscapes that reimagine ancient and Indigenous forms.

Z’otz* Collective will be in residence in the Gardiner Museum’s Laura Dinner & Richard Rooney Community Clay Studio between July 4 – 8, during which time they will produce new ceramic works to be featured in the Museum’s Exhibition Hall. These new ceramic works will be presented alongside three pieces that the Collective has selected from the Museum’s Ancient Americas collection: Anthropomorphic Effigy Urn, Seated Figure with Gold Nose-ring, and Jaguar-effigy Tripod Dish.

In addition to the ceramic works, Z’otz* Collective will present a series of drawings that will be shown beside a large-scale mural that they will create live in the space from August 12 – 16.

Committed to incorporating the voices of various communities, Z’otz* Collective invites visitors of all ages to add to their presentation through a hands-on community project titled “Drawing with Scissors.” For this activity, visitors will use black construction paper to cut out shapes and forms inspired by the Ancient Americas collection, taking into account Mesoamerican mythology, beliefs, and cultural context.

This activity signals the prominent use of paper in Latin American artisanal practices, such as papel amate, (bark paper), Otomi cut-outs, papel picado (colourful festive banners), and paper mâché alebrijes, (fantastical creatures), among others. The immediacy of using scissors to “draw” relates to the spontaneous process that Z’otz* Collective uses in their work. As the forms created by visitors accumulate during the run of the presentation, the silhouettes will spark a visual conversation between Z’otz* Collective’s artwork, the Ancient Americas collection, and the visitors to the Museum.

The Gardiner Museum’s Community Arts Space is a series of collaborations with community partners and local artists rooted in the real and metaphorical ability of clay to transform. It builds on the Museum’s long-term commitment to working within and beyond our gallery walls to re-envision the roles and responsibilities of a museum to its communities.

Unified by an annual theme, these community-oriented programs include clay-based learning, artist talks and demonstrations, public events, critical discussion, and a feature presentation in the Exhibition Hall in the summer. Programs are presented across multiple platforms and venues, including online, off-site, in our studios, and on our outdoor plaza.

CAS 2022 explores the theme “Fragments and Fictions,” inviting our community partners and visitors to reflect on and reimagine the narratives in our collections. This year’s community partners include Z’otz* Collective, Connected North, and Niiwin Wendaanimak (Four Winds).