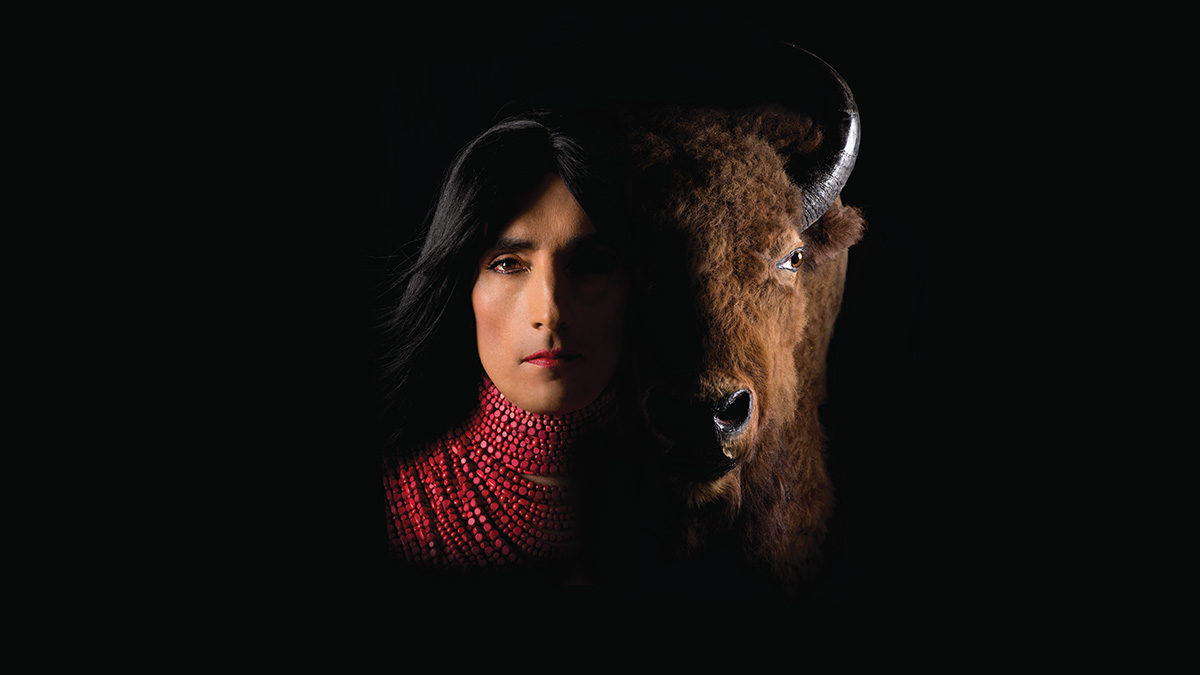 Kent Monkman: The Rise and Fall of Civilization

Kent Monkman’s site specific installation entitled The Rise and Fall of Civilization references the near extinction of the American bison in the 1800s when humans killed approximately 50 million, reducing their numbers to the hundreds. The settlers killed the bison for their pelts, wastefully leaving the meat to rot on the bone. Bison bones were then collected and used for fertilizer and bone china. The American military also sanctioned the destruction of the bison to open the West for cattle ranching, and to remove the primary food supply of the Native peoples and dispossess them of their land. The decimation of Indigenous cultures was perpetuated through the residential school and reservation systems.

This installation is comprised of the buffalo jump: a structure measuring approximately 9 feet high, simulating a natural rock formation used to hunt buffalo. Two full-sized mounted bison stand atop the cliff beside a sculpture of Miss Chief, the artist’s alter ego.

The smashed ceramics at the base of the cliff reference the build up of bones often found at buffalo jumps, as well as the history of Indigenous ceramics found at sites across North America. At the Ulm Pishkun Buffalo Jump, one of the largest in the world, a layer of compacted bones thirteen feet deep was found. This compacted bone, much like the bone ash used to make bone china, fills the space below the cliffs and tells the story of thousands of years of sustainable hunting, layer by layer, before the quick destruction of the bison by the European settlers. The layers of sediment in the rock face and the compacted bone and ceramics at the foot of the cliff allude to the layers of civilization, from the ancient to the present. The plunging bison that leap from the cliff and morph into modernist bulls and back into ancient rock drawings function as a metaphor for the inevitable flow of history.

The Gardiner Museum holds over 300 pieces of ceramic tableware made of bone china from the nineteenth century.

Kent Monkman is a Canadian artist of Cree ancestry who works with a variety of mediums, including painting, film/video, performance, and installation. He has had solo exhibitions at numerous Canadian museums including the Montreal Museum of Fine Art, the Museum of Contemporary Canadian Art in Toronto, the Winnipeg Art Gallery, and the Art Gallery of Hamilton. He has also participated in various international group exhibitions including: The American West at Compton Verney in Warwickshire, England; Remember Humanity at Witte de With in Rotterdam; the 2010 Sydney Biennale; My Winnipeg at Maison Rouge in Paris; and Oh Canada! at MASS MOCA.

Monkman has created site specific performances at the McMichael Canadian Art Collection, The Royal Ontario Museum, and at Compton Verney. He has also made Super 8 film versions of these performances which he calls “Colonial Art Space Interventions.” His award-winning short film and video works have been screened at various national and international festivals, including the 2007 and 2008 Berlinale, and the 2007 Toronto International Film Festival. His work is represented in numerous public and private collections including the National Gallery of Canada, Montreal Museum of Fine Arts, Museum London, The Glenbow Museum, The Museum of Contemporary Canadian Art, The Mackenzie Art Gallery, the Art Gallery of Ontario, the Smithsonian’s National Museum of the American Indian and the Vancouver Art Gallery.