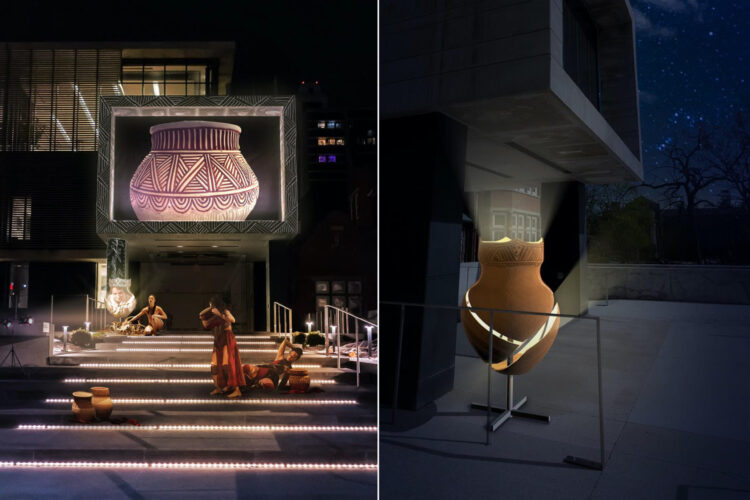 An advisory group chaired by artist Kent Monkman and comprised of local Indigenous community members selected Smith from a group of three finalists that also included artists Ludovic Boney and Nadia Myre. Smith’s proposed sculpture, Talking Earth, will be installed at the entrance to the Gardiner in 2022 and activated through a series of performances by Kaha:wi Dance Theatre.

Smith is a multidisciplinary artist from the Kahnyen’kehàka Nation, Turtle Clan, Six Nations of the Grand River, Haldimand Treaty lands. A world-renowned dancer and choreographer, she also works as a pottery designer at her family’s studio, Talking Earth Pottery.

“It is a tremendous honour to be selected for the Gardiner Museum’s public art commission,” said Smith. “My family lineage is grounded in the reclamation of Kahnyen’kehàka pottery, initiated by my grandmother Elda “Bun” Smith, contemporized by my parents Steve and Leigh Smith at Talking Earth Pottery, and passed on to me through my pottery design and interdisciplinary works with clay. Talking Earth shares my rich Kahnyen’kehàka ancestral story.”

The proposed public artwork is an etched ceramic sculpture inspired by a Rotinohnsyonni four-cornered earthen pottery vessel. It will be fractured and partially reconstructed, with light shining through the cracks between the broken shards. The vessel symbolizes the disruption and trauma caused by colonization, including the legacy of the residential school system, assimilative policies imposed on womxn, and the crisis of Missing & Murdered Indigenous Womxn and Girls. Moving toward intactness, the vessel evokes the process of re-assembling culture, memory, and ancestral knowledge.

The installation of the sculpture will be celebrated in a series of live durational performances on the Museum’s front steps in which three Indigenous womxn performers will dance and hand-build clay vessels. 3D mapping and projections, including photographs of the Smith family, will animate the artwork and the Museum’s façade, in collaboration with AVA Animation & Visual Arts Inc.

Smith has assembled a visionary team to assist in the realization of her ceramic sculpture: Carmela Alfaro-Laganse, Jordi Alfaro, Hamilton Scenic Specialty Inc., and Solotech Inc., with facilities support by McMaster University.

Together, the permanent artwork and performance aim to channel the earth’s voice and story, and more importantly, compel us to listen at this critical moment.

“Now is a time for listening. Listening to the story of the land and what is cradled and buried within Yethi’nihsténha tsyonhwentsyà:te / Mother Earth,” said Smith. “It is my hope that the work will creatively interweave community and public activation, offering a public space for teaching and reinvigorating our connection with the earth.”

“Talking Earth exquisitely embodies all of the goals of this commission,” said Chief Curator and Deputy Director, Sequoia Miller. “It unites traditional Indigenous ceramics with a contemporary practice, creating a highly visible artwork that becomes expansive through technology and performance. We are honoured to host Santee Smith’s work at the Gardiner and look forward to it becoming a destination among Toronto’s public art.”

Talking Earth received grant funding as part of ArtworxTO: Toronto’s Year of Public Art 2021–2022, a year-long celebration of Toronto’s exceptional public art collection and the creative community behind it. Working closely with artists and Toronto’s arts institutions, ArtworxTO will deliver major public art projects and commissions, citywide, from fall 2021 to fall 2022. Supporting local artists and new artworks that reflect Toronto’s diversity, ArtworxTO is creating more opportunities for citizens to engage with art in their everyday lives. This September, the City of Toronto invites the public to discover creativity and community–everywhere. Visit www.artworxTO.ca for full details.

Tekaronhiáhkhwa / Santee Smith is a multidisciplinary artist from the Kahnyen’kehàka Nation, Turtle Clan, Six Nations of the Grand River, Haldimand Treaty lands. Santee trained for six years at Canada’s National Ballet School and holds Physical Education and Psychology degrees from McMaster University and a M.A. in Dance from York University. Santee produced her first choreographic work Kaha:wi—a family creation story in 2004 and later founded Kaha:wi Dance Theatre in 2005, which has grown into an internationally renowned company. Her body of work includes 14 productions, over 30 short works for stage and film/television and numerous commissions. Santee’s artistic work explores the intersection of Indigenous and new performance from an interdisciplinary, Konnonkwehón:we (Womxn’s) approach.

Santee is also a pottery designer at her family studio, Talking Earth Pottery. Her pieces have been featured in numerous private and public collection around the globe and in museums such as the Woodland Cultural Centre and the Canadian Museum of History. Santee is a sought-after teacher and speaker on the performing arts and Indigenous performance and culture. Her life and works have been the topic of TV series and films and most recently on CBC Arts – The Move II. Smith is the 19th Chancellor of McMaster University.

ABOUT THE GARDINER MUSEUM

The Gardiner Museum brings together people of all ages and backgrounds through the shared values of creativity, wonder, and community that clay and ceramic traditions inspire.

The Gardiner Museum’s collection of ceramics comprises approximately 4,000 objects, and focuses on specific areas which have been collected in depth. These include a world-renowned collection of European porcelain, with particular strengths in Meissen, Vienna, and Hausmaler decorated porcelain, as well as a comprehensive collection of figures inspired by the commedia dell’arte. It holds the preeminent collection of Italian Renaissance maiolica in Canada, and a superb collection of English tin-glazed pottery. The Gardiner preserves highly significant collections of ceramics from the Ancient Americas, Chinese blue and white porcelain, Japanese porcelain, and contemporary Canadian ceramics. It also houses a research library and archives, clay studios, award-winning Shop, and a restaurant.

The Gardiner Museum is among the few museums in the world focused on ceramics, and is one of the world’s most notable specialty museums. For more information, please visit: gardinermuseum.com.