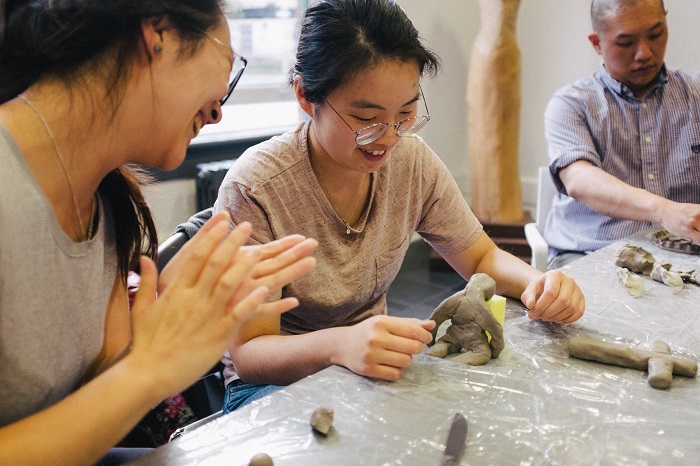 For several years in my late teens and early twenties, I often traveled from out of town (all the way from Montreal!) to Toronto to take part in what I felt must be the most creative and expansive queer Asian arts community in the world. As a writer and performer, some of my greatest influences have come from queer Asian artistic and activist projects rooted in this city, from Asian Arts Freedom School, to the ARISE residency at Buddies in Bad Times Theatre, to the Unapologetic Burlesque workshop series.

Yet when I finally took up residence in the 416 almost two years ago, I was shaken to realize that all of these community arts groups—and many more—were now defunct or disbanded, at least temporarily. The organizers and artists involved had moved on to other projects, as people do; and in many cases, funding had dried up, subject to the whims of granting bodies, local governments, and private donors.

What would happen to the legacy of all that organizing, community-building, creating, and performing? I often wonder. Would all those stories fade away, lost to the dust of time gone by?

Given these worries, I was delighted to come across Invisible Footprints, a living history project devoted to Toronto’s queer Asian history. 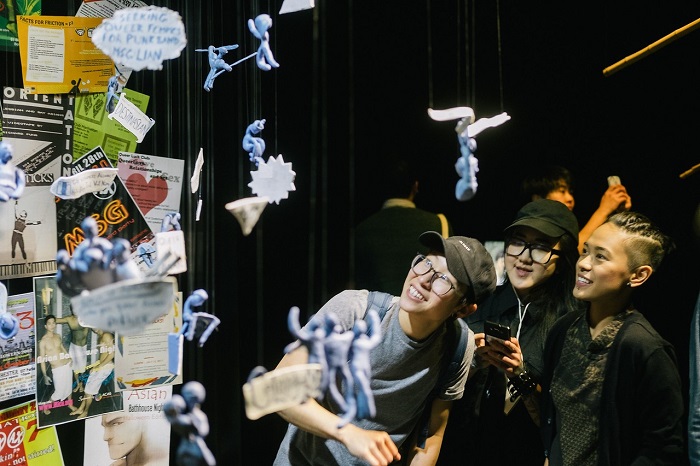 Invisible Footprints was founded by community educator Mezart Daulet and writer-director Vince Ha, a collaborative duo who work together under the whimsically-named Rice Roll Productions, but both organizers emphasize that it is very much a collective effort that bears the marks of many contributors, including artists, archivists, and organizers from various generations of queer Asian Torontonians.

“The core of this project is collecting, uncovering, and showcasing East and Southeast Asian stories from past, present, and future,” says Daulet, who describes his role as that of project manager.

Last year, Invisible Footprints curated an exhibition at the Ontario College of Art and Design that featured seven contemporary queer and trans Asian artists’ reflections on the theme of queer Asian history. This year, the group is embarking upon an even more multifaceted project for the Gardiner Museum’s Community Arts Space that comprises both an exhibition as well as a series of workshops where Asian-identified members of the LGBTQ community are invited to join in clay-making and dialogue on themes selected by the featured artists.

“This [year’s exhibition] is interpreting the word ‘archival’ differently,” says Khanh Tudo, a filmmaker and installation artist whose theme for the Invisible Footprints show this year is pleasure and comfort. Her part of the exhibition, she tells me, will include a giant, interactive durian sculpture that viewers can climb into: “[I’m] more so looking at it as not so much big accomplishments that you can hold physically but rather emotional archiving, archiving how our bodies experience feeling and memory.” 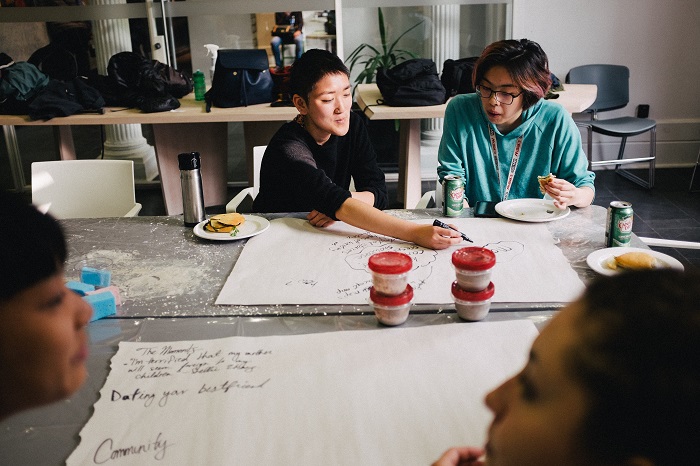 I had the pleasure of attending a community dialogue and clay-making workshop based on Tudo’s theme of pleasure. The participants, approximately ten LGBTQ Asian individuals, gathered at The 519 Church Street Community Centre along with Daulet, Ha, Tudo, and workshop facilitator Jia Qing Wilson-Yang, who is an acclaimed writer and performer in her own right. Wilson-Yang deftly led the group in exploring a series of poetic and evocative questions around the ideas of pleasure and comfort.

As we spoke, themes of family, migration, cultural connection and disconnection, mental health, survival, and resilience rose to the surface. That is to say, our shared history was brought into the room—not history as it is generally understood, in the sense of archival material disconnected from the present, but history as it is felt between people, in its impact on our present lives.

Following this thought-provoking discussion, Tudo provided the group with blocks of raw clay and encouraged us to create sculptures based on the conversation. Some the sculptures from the workshop series, she mentioned, might be included in the upcoming exhibition at the Gardiner, thus making the art presented truly a community creation. 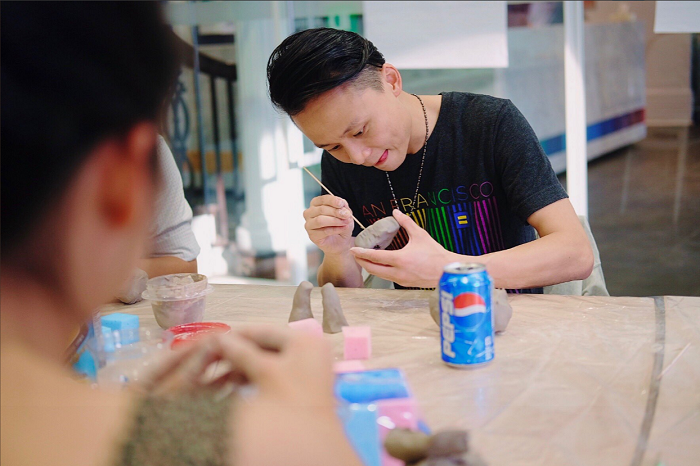 I don’t know if my particular sculpture will make the cut (while the other participants made some truly beautiful and astonishing pieces, mine was a lumpy mess that most closely resembles a dinosaur crossed with a snail), but the experience was edifying nonetheless. What I got to take home from the workshop was a sense of the magic I was once so hungry to discover as an emerging artist—a sense of connection, of community, of being tapped into something that had come before.

In that moment, all those stories I had been so worried would fade away—the stories of queer Asian cultural production and community organizing—came alive, not as a decontextualized piece of the past, but as part of a living, dynamic community.

Invisible Footprints reminds me, reminds us, that history is not so much about where we have been, but where and why we are now—and where we will go next.

“It’s not meant to be anything that’s fixed,” says Ha.

Kai Cheng Thom is a writer and performer with a master’s degree in social work. This blog post was commissioned in support of Invisible Footprints 0.2: Deep Cuts, a Community Arts Space exhibition on view from July 5 – 19. Community Arts Space is generously supported by TD Bank Group.