Poetry and pottery: The Gardiner Collection becomes a muse 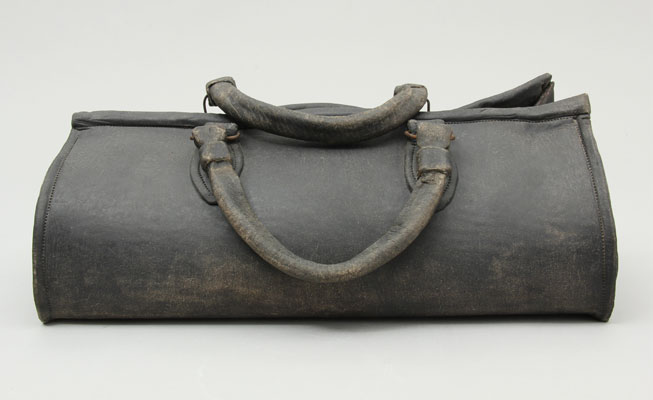 In the spring of 2020, as we were experiencing our first months of COVID-related closure, I curated a virtual exhibition entitled Women and Ceramics for the Google Arts & Culture platform. The exhibition invites our public to discover ceramics through the lens of female experiences. Selected from all areas of our collection, the objects highlight women’s role as recipients and users of objects; subjects of representation; collectors and patrons; and innovative makers defying male-dominated traditions.

The online exhibition caught the attention of acclaimed Toronto poet and teacher Molly Peacock, who reached out to express her interest in making it the foundation for her “Poetry and Pottery” seminar. Held virtually in July 2020 at the 92Y Unterberg Poetry Centre in New York City, the workshop attracted poets from across North America. I had the pleasure of joining the group for one of their sessions to introduce the Gardiner Museum and share insight into the works and themes of the exhibition.

Over the following weeks, the participants chose one or more objects from the exhibition as starting points for their poems. It’s been fascinating to see how objects from the Gardiner’s collection inspired this group of writers, and how their words imbue the objects with new life and meaning. I’ve selected a few examples to share with you. I hope you enjoy them as much as I did! 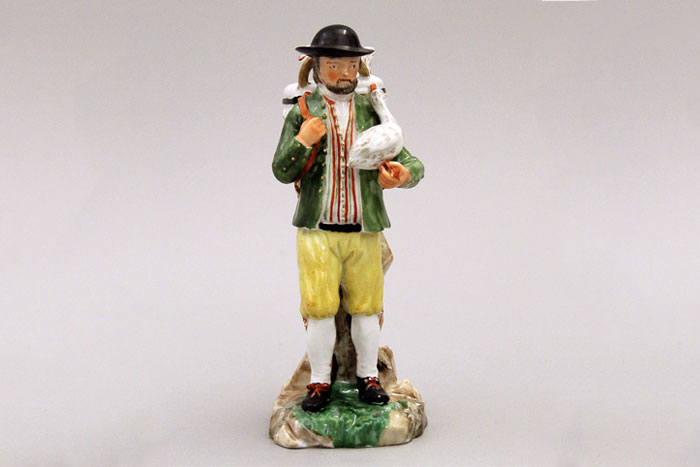 This figure of a farmer holding a goose was made c. 1780 at the Royal Copenhagen manufactory, founded under the patronage of Queen Juliane Marie of Denmark. Considered a strong and modern queen, Juliane Marie actively supported research in the natural sciences and promoted the development of new products using local resources, including porcelain.

FIGURE OF A FARMER HOLDING A GOOSE

I could go for a man like this. His skin
literally porcelain. Diminutive, he fits

in a pocket. And he’s Danish!
He courts me with live poultry

and a backpack full of items I imagine:
summer beer (the same Ditley Hansen’s

of butter. Even cutlery and a rustic
blue cloth! Perhaps a flute or lute. So what

if he’s out of fashion, if his short pants
and white stockings scream 1780.

He looks sturdy, has survived centuries.
His white shirt shines pristine, his brass

buttons wink, his waistcoat glows a grassy
green. He keeps his beard and mustache neat.

Though he’s likely not a delightful
conversationalist, nor one for inventive

recreation, he’s honest and solid.
The type I should have married.

He grows potatoes and cucumbers, owns
a goose. Maybe geese! He understands

what’s of use. Young women will look
right past him. Once I would have, too.

Jody Winer’s poems have appeared in Epoch, The Massachusetts Review, phoebe, Poet Lore, South Carolina Review, and The Saint Ann’s Review. Her poem Figure of a Farmer Holding a Goose was recently published in The Ekphrastic Review. Her chapbook Welcome to Guardian Angel School won the 2019 Finishing Line Press Competition. A fellow of MacDowell and a Pushcart Prize nominee, Jody lives in New York and loves Toronto. She has worked as a librarian, writer, and dog wrangler. 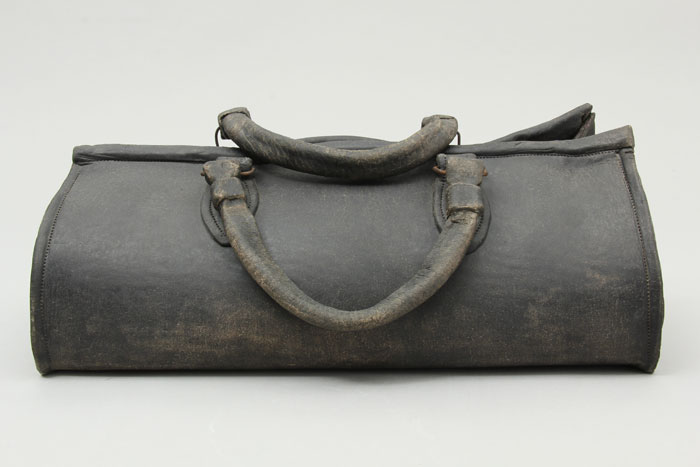 Marilyn Levine’s Doctor’s Bag  turned out to be a favourite among the seminar participants. Levine made the piece, featuring her signature faux-leather style, in 1970 as part of her MA comprehensives at Berkeley. Levine is one of Canada’s most celebrated ceramic artist.

Thick, rounded handles lie at the ready.
How many times did they respond to steady,
skilled hands when sirens shrilled in city streets,
swung to the manic beat of the medic’s hurrying feet?

Tired, they slump over the worn leather
cracked, wrinkled, pocked by time and weather.
Here, it seems, history rests in a glass case,
0000but touch it.
00000000000Blind fingers see not a trace

of the supple, handstitched pouch that eyes perceive.
Hard and cold, the molded clay deceives
with shape so real, it makes us wonder,
“Do we see true or do we blunder?”

Carol Nolde’s poems have appeared in many publications, including the anthologies Knowing Stones: Poems of Exotic Places; the second edition of Love Is Ageless-Stories About Alzheimer’s Disease; Child of My Child; Joys of the Table; and Forgotten Women. She is the author of the chapbooks Comfort in Stone and Things Live After, as well as the full-length collection, Emblems. 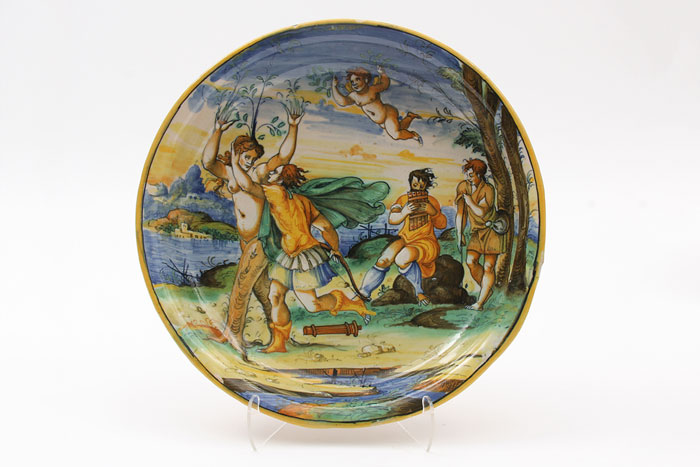 Why didn’t your father turn you into an otter
or a river fish? Anything but a tree!
As you transformed, Apollo’s hands grabbed and groped
you with lust, pulling at the bark
that hardened you like a scar, ripping the leaves
from your hair
and flinging them to the wind.
What protection is that from a father?
From a god!
Daphne, what would your mother have said
if she’d been there,
to see a daughter of water
rooted in earth
condemned to be a daughter of air?

Genevieve Lehr is a Canadian poet based in Halifax. She has published her poetry in literary journals, both in Canada and abroad, and was the editor of Come And I Will Sing You: A Newfoundland Songbook. She authored the chapbook The Design of Wings, and her poetry collections include the The Sorrowing House and Stomata. 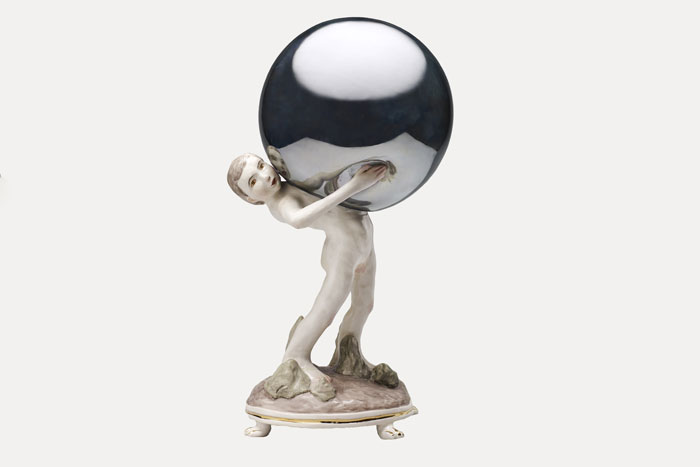 Shary Boyle is one of Canada’s leading contemporary artists, with a practice ranging from live performance to ceramics. She made God’s Eye as a prototype for her work at the Canadian Pavilion at the Venice Biennale in 2013. The sculpture depicts a boy bent backwards by the weight of the moon, and serves as a metaphor for humanity’s insignificant place in the universe.

Born of clay,
swaddled and held,
lengthened and patted,
on the shelf drying,
then Cone 8! Fired
until you emerged
a glassy stripling.

Soon the ball was tossed
and of course
you had to catch it.
Heavy, wobbling
(yet under your palms
you could feel some give).

Surely someone will come
and lift it from your chest.
But when? For now, there you are,
too small to let it go,
surprised to be holding
a thousand times your weight.

Heavy, gleaming,
a polished geode,
a new moon,
the earth at night–
Beautiful burden, whose world is this?

Melinda Green Tepler is a painter and printmaker who graduated from Yale University in 1977. Her paintings and prints have been shown at the Katonah Museum of Art; the Center for Contemporary Printmaking; the Fine Arts Gallery of Westchester Community College; and the Bendheim Gallery in Greenwich. She is a founding member of Two Whippets Artists Guild, exhibiting bi-annually in Westchester, NY.