Home / Blog / True copies: The history of a dish from the factory of Ulisse Cantagalli
Blog

True copies: The history of a dish from the factory of Ulisse Cantagalli 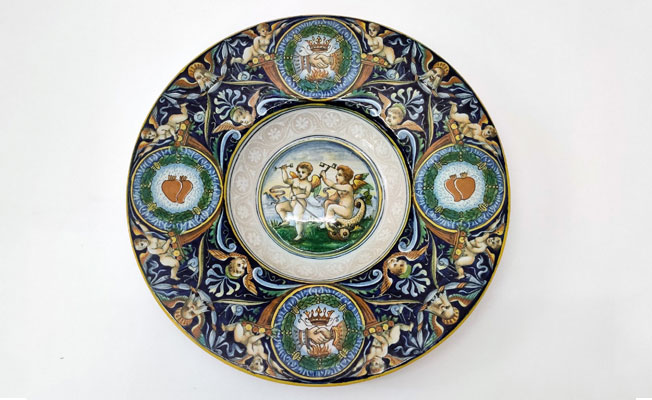 In 2020, a beautiful dish with playing cherubs entered the Gardiner Museum’s permanent collection, a donation from James Kudelka from the Estate of Jim Wies. Visitors to the Museum can see it now on display in the lobby exhibition Gifted: Recent Acquisitions to the Permanent Collection.

At first glance, viewers will associate its style with the art of maiolica, a type of tin-glazed earthenware produced in Renaissance Italy. However, this piece was actually made some 350 years later at the factory of Ulisse Cantagalli in Florence. Throughout the 1880s and 1890s, Cantagalli specialized in the reproduction of ceramics from the 1400s and 1500s.  This small object stands at the nexus of stories about maiolica collecting, the creation of fakes and reproductions, and the nineteenth-century fashion for ceramics inspired by a range of styles from the past. 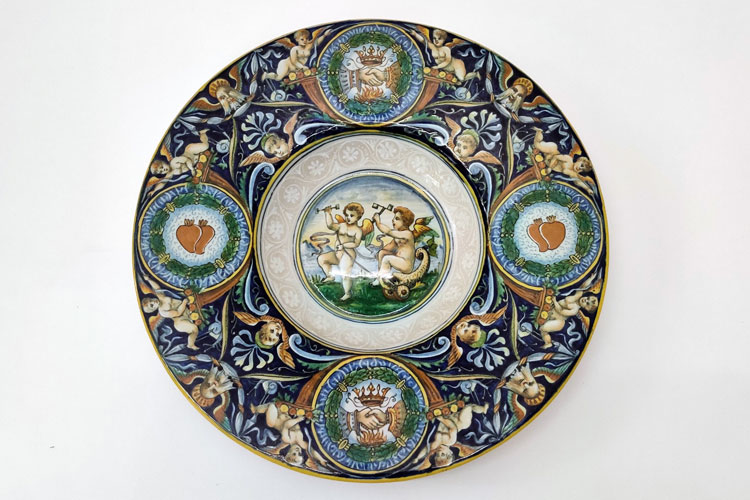 The mid-nineteenth century witnessed a surge of interest in the collecting of Italian Renaissance maiolica. This period saw the foundation of national galleries together with the formation of some of the most important maiolica collections, including those of the South Kensington Museum (now the Victoria and Albert Museum) and the British Museum in London. The political turmoil surrounding Italy’s unification as a country (1848-1871) caused many noble families to lose their wealth, and as a result, major private collections entered the market.

Italian and foreign dealers searched the country’s towns and villages for maiolica treasures to sell to collectors. By the 1850s, the demand for maiolica and its price had reached their peak. As originals became increasingly rare, over the following decades, factories made reproductions that satisfied the taste and interest in Renaissance ceramics. Some of these objects were admittedly fraudulent imitations commissioned by dishonest dealers who presented them to clients as genuine. However, alongside deceptive forgeries, many reproductions were conceived as honest alternatives to the ownership of rare and expensive originals. The Cantagalli manufactory specialized in the latter type of production.

In 1878, Ulisse Cantagalli (1839-1901) and his brother Romeo inherited their father’s ceramic manufactory in Florence and revived it as the Manifattura Figli di Giuseppe Cantagalli. Under Ulisse’s leadership, the bulk of the manufactory’s output consisted of reproductions of glazed ceramics based on Islamic and European models, especially Iznik pottery, Valencian wares, and Renaissance maioilca, the latter dominating production. Cantagalli’s revival maiolica was inspired by works studied at the Bargello Museum in Florence as well as in London, including at the South Kensington Museum and the British Museum. There, he also befriended some of the leading collectors, curators, and scholars of the time.

Cantagalli’s wares were extremely successful, being presented at international exhibitions from the 1880s onward and sold to private collectors and institutions alike, both in Britain (V&A and British Museum) and in the United States (Metropolitan Museum of Art and  Boston Museum of Fine Arts). 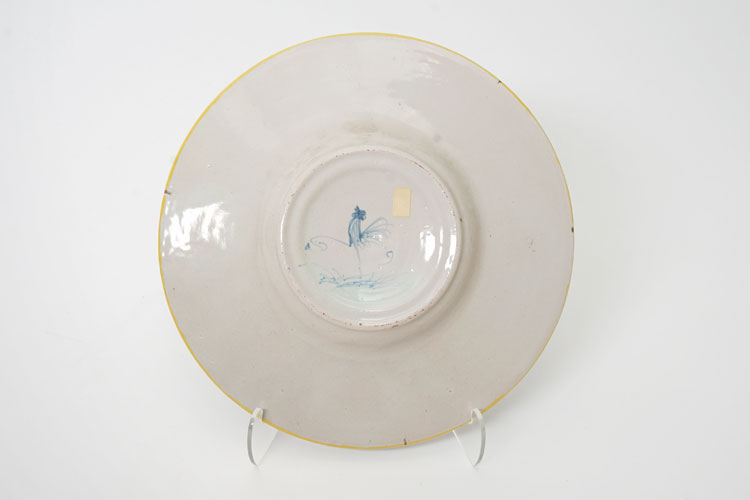 Back view of the Tondino dish

That Ulisse Cantagalli’s aim was not to mislead collectors and curators of the time is indicated by the inclusion of a factory mark on the back of objects. The mark, seen on the piece acquired by the Gardiner, features a singing or crowing cock. This is actually a play on the name Cantagalli: “Canta” from the verb “cantare”, to sing, and “gallo”, meaning rooster in Italian. 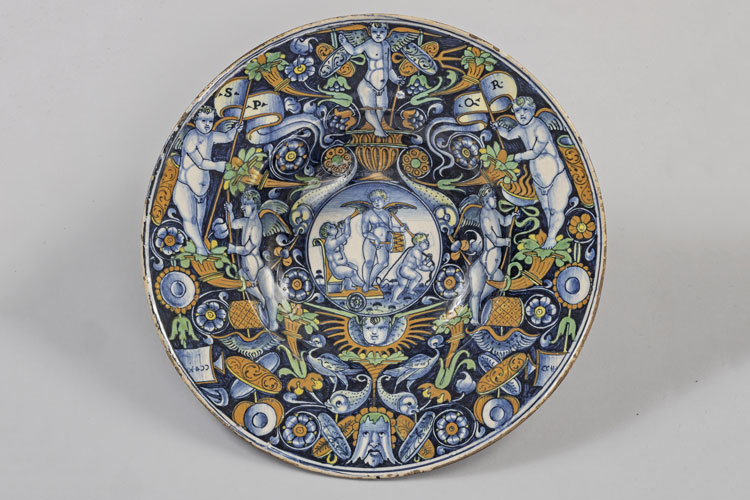 The Gardiner’s Cantagalli dish is shaped as a tondino, a common Renaissance form characterized by a narrow well and large rim. It displays an ornamental repertoire typical of sixteenth-century maiolica, in particular pieces from Castel Durante (present-day Urbania). For instance, similar motifs, including the playing putti (cherubs) in the centre and the bearded masks around the rim, appear on a dish attributed to Giovanni Maria in the Gardiner’s collection. 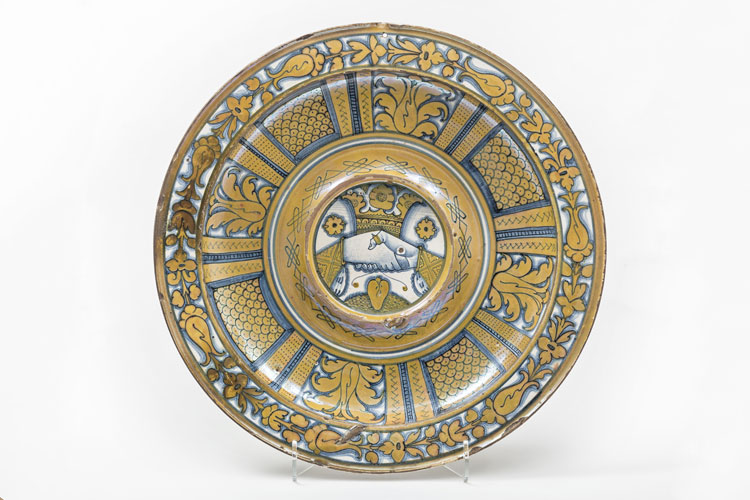 The Cantagalli dish also features hearts and clasped hands in roundels around the rim, popular forms from the Renaissance decorative language. The Gardiner collection also holds a large lustre basin made in Deruta, which prominently features a pair of clasped hands (known as a fede motif, for faith) topped by a crown. In the Renaissance, such symbols commonly appear on maiolica and other objects made to commemorate betrothal, marriage, and childbirth, the images of male infants expressing of a desire for male offspring.

The Cantagalli dish can be situated within the broader context of nineteenth-century historicism. The period was marked by the revival of a wide range of historical styles, as designers working across media turned to past cultures for inspiration. Approaches ranged from archeological re-creations and interpretations to more inventive combinations of styles. 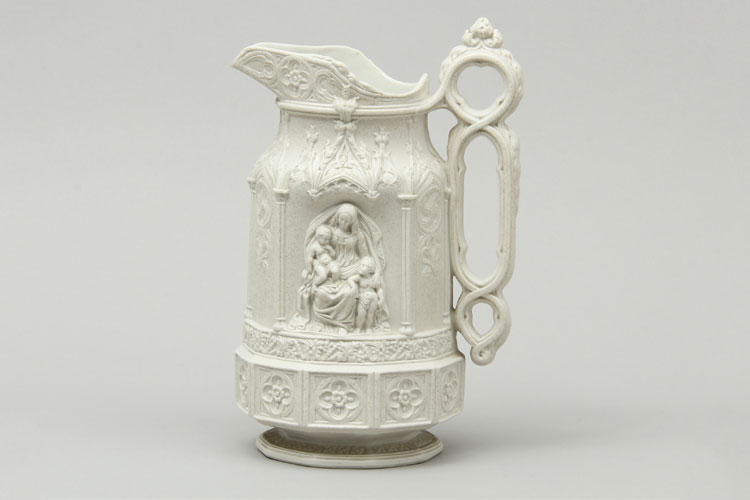 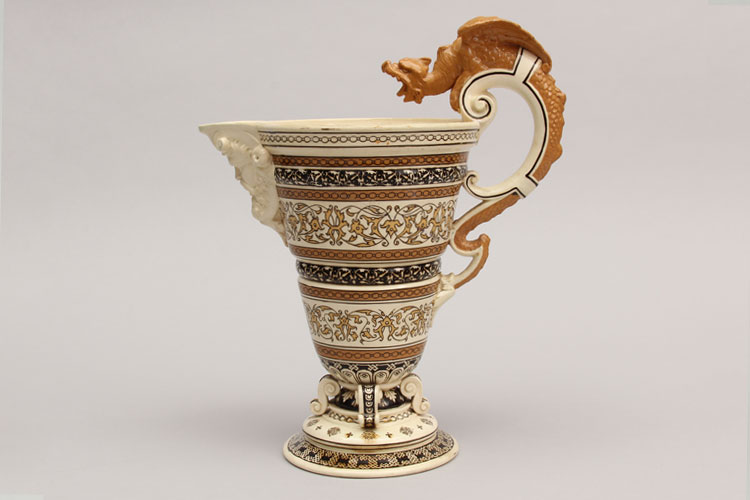 The “Minster” jug by Charles Meigh & Son and the ewer in the Saint-Porchaire style by Minton, both in the Gardiner’s collection, exemplify the Gothic and Renaissance Revivals respectively. Minton’s ewer interprets a highly refined type of ceramics characterized by complex shapes and intricate surface ornament produced in sixteenth-century France. While the authorship of these works has been debated, scholars now associate this production with the workshop of the celebrated potter Bernard Palissy (c. 1510-c. 1589), who in the nineteenth-century rose to the status of cult figure.

During the second half of the century, the Renaissance Revival could serve cultural, political, and national ambitions through its connection with the cultural and artistic accomplishments of the Renaissance period. This was the case in the newly united Italy, where maiolica and other types of objects reviving the aesthetic of the Italian Renaissance established a link with a shared national heritage.

The recently acquired Cantagalli maiolica dish therefore asserts the value of reproductions and their capacity to open a range of fascinating conversations.

Thornton, Dora. “‘Deglj Antiquari il Re’ : Giovanni Freppa as Dealer, Collector and Forger in Nineteenth-Century Florence,” in Maiolica in Italy and Beyond, ed. by J.V.G. Mallet and Elisa P. Sani. Oxford: Ashmolean Museum, 2021.