Case for conservation: A leather presentation case gets special treatment 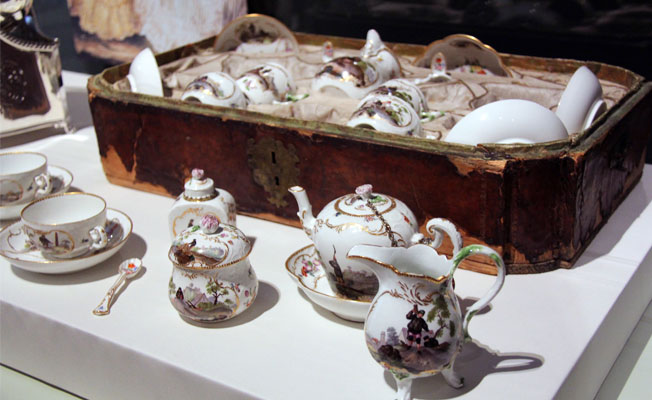 The Gardiner Collection is primarily made up of ceramics—from tea cups and saucers to abstract sculptural works. However, the collection also features a small number of non-ceramic works, including silver, wood, paper, and leather. These non-ceramic works, such as a series of Chinese paintings depicting the process of porcelain production, enhance our ceramic pieces. 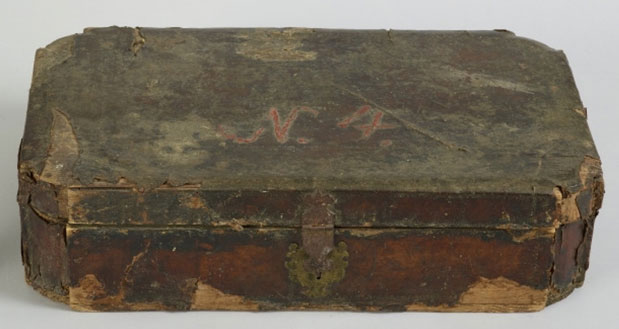 One of the Gardiner’s most prized objects is a porcelain tea and chocolate service—known as the ‘Miners’ Service—complete with leather presentation case made at Meissen in Germany c. 1750-55. It’s called the ‘Miners’ service because it depicts idealized scenes from the silver mines of Augustus the Strong, King of Poland and Elector of Saxony. The proceeds from these mines funded the royal porcelain factory at Meissen. 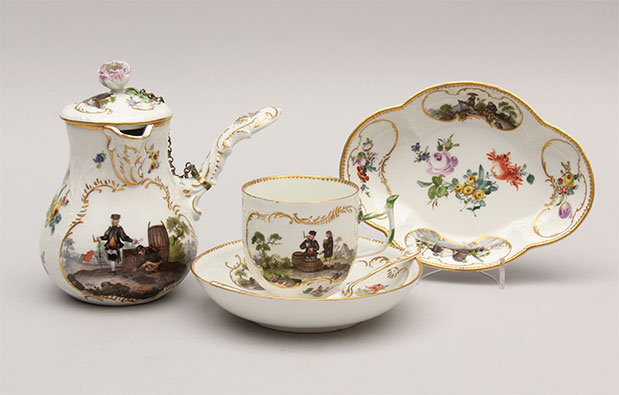 It’s rare to have a porcelain service with its original case; the organic nature of the leather, wood, and other materials that make up such cases do not always survive the ravages of time. In fact, this case was in extremely poor condition when it was purchased by the Gardiner Museum in 1980. As a result, the case was never shown in the galleries, though the porcelain service has been on display many times.

In 2015, when the Museum underwent an extensive renovation to our European Porcelain Galleries, former Chief Curator Meredith Chilton was looking for opportunities to display objects that had been in storage for a long time. The presentation case stood out, but the labour and expense to conserve it seemed out of reach.

As a museum, the Gardiner is eligible to apply for treatment services at no cost, provided the project meets the appropriate criteria. With the help of a contract conservator, Marlene Wilson, we applied for treatment for the leather presentation case. In early 2016, we received notice that our application had been approved and arrangements were made for the case to be shipped to Ottawa. 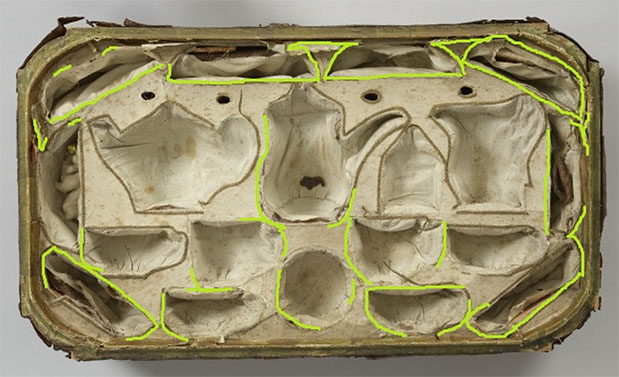 Identification of work required on the interior of the case; Image courtesy of the Canadian Conservation Institute

Almost immediately, the case had to go into cold storage for several months, as the initial inspection revealed evidence of a previous pest infestation. Cold storage is routine for organic objects when arriving at a new location to protect the collections already on site. When the case emerged several months later, work was ready to begin.

In June 2017, the Gardiner received a treatment proposal detailing the work that CCI had planned. They noted many materials in the construction of the case: wood, leather, metal, paper, and textiles, all of which required extensive work. It would take another 15 months or more before the treatment was complete.

Repair of the fabric tears in progress; Image courtesy of the Canadian Conservation Institute

When we received the final report, it contained two interesting discoveries. First, a brown stain was noted on part of the textile. The conservators decided to perform an analysis using pyrolysis-gas chromatography-mass spectrometry. The results revealed traces of theobromine and caffeine, compounds found in chocolate. This confirmed that the service had indeed been used for hot chocolate, which became fashionable in the 17th and 18th centuries. 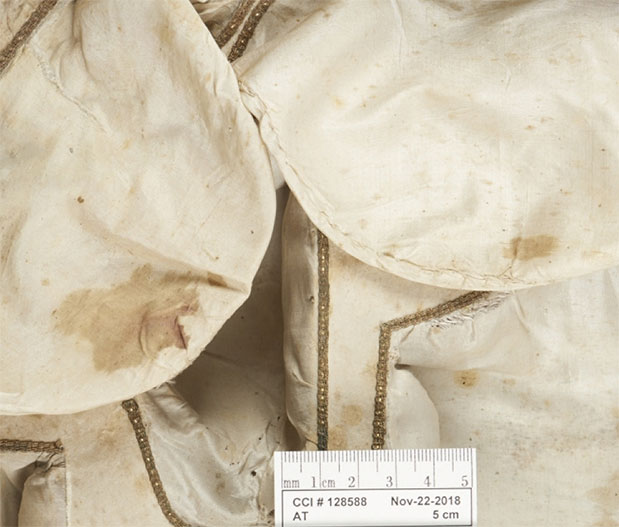 The second interesting discovery was Cyrillic text on the paper label affixed to the top of the lid. While on display in Ottawa during Doors Open, a Russian visitor was able to translate some of the text. The top word is clearly decipherable as ‘baggage’ and the middle word is most likely ‘belonging’. The final word is presumed to be a surname. Essentially, it’s a ‘This bag belongs to’ label from the past! The service was probably owned by a Russian household at some point in its history. 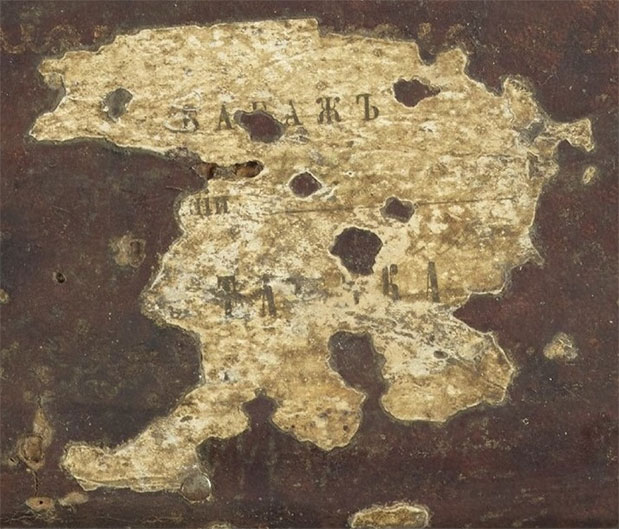 Remains of a label with Cyrillic text; Image courtesy of the Canadian Conservation Institute

With the presentation case back at the Museum by late 2018, it was just in time for its debut in the exhibition Savour: Food Culture in the Age of Enlightenment, which opened in October 2019. It then travelled with the exhibition to the Wadsworth Atheneum in Connecticut. Quite a journey for this 270-year-old case!

Without conservation, this piece would have continued to deteriorate over time and would not have been fit for public display. By preserving it, the case can serve as a portal to the past, illuminating the history of 18th-century porcelain for future generations. 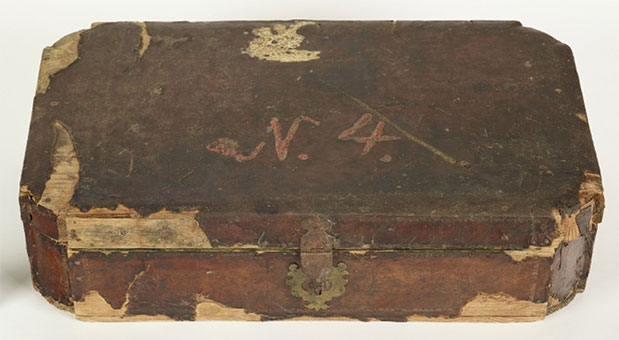 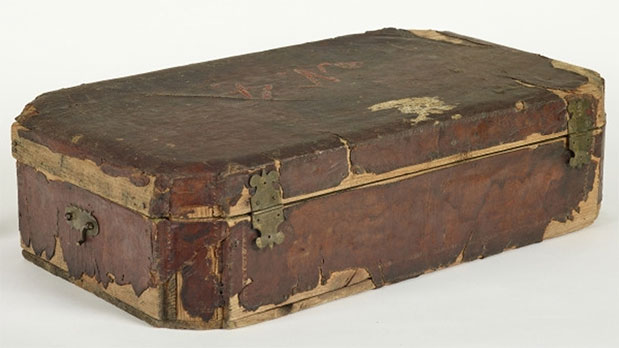 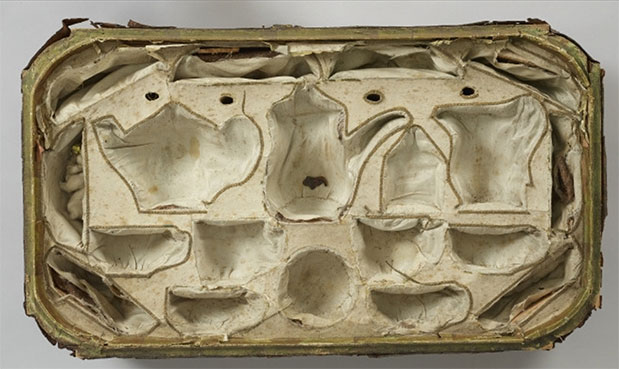 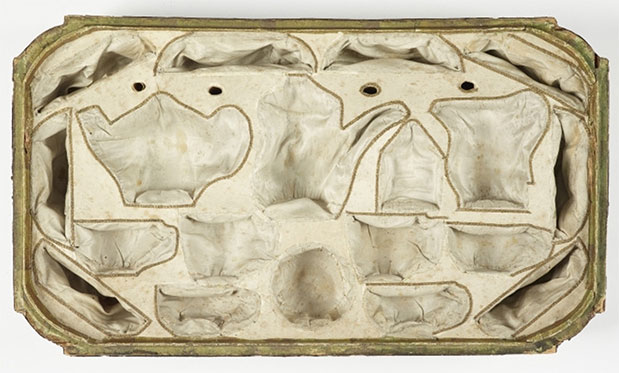