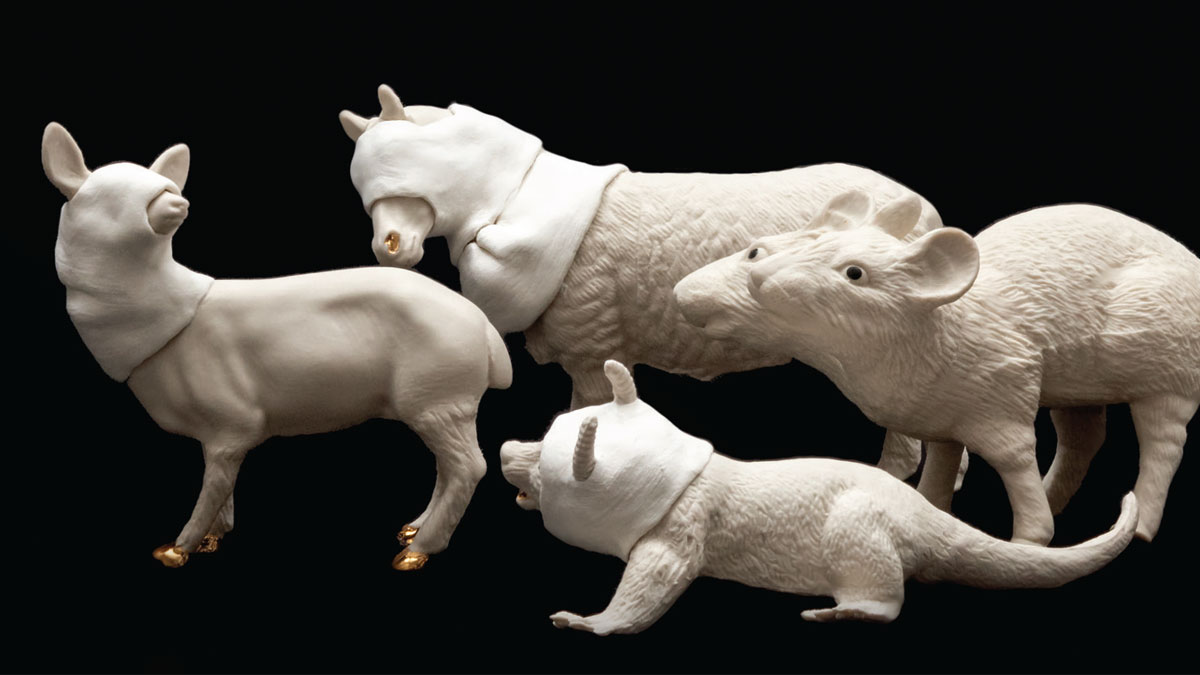 Canadian ceramist Janet Macpherson is widely acclaimed for her technically complex use of slip-cast porcelain in the creation of intricate animal forms. Some are curious, hybrid creatures, often diminutive in scale, wrapped, bandaged or masked. Others are full-sized and true to life. In Macpherson’s bestiary, animals stand in for the complexity of human experience.

Janet Macpherson: A Canadian Bestiary is an unprecedented group of installations where the artist uses her unique visual language to convey a very personal view of Canada. Through four immersive installations that include sound design by Justin Haynes and Janet Macpherson, and video projections by Renée Lear, Macpherson revisits moments in Canadian history and questions commonly-held conceptions about the North, identity, and our relationship to landscape. This exhibition was commissioned in response to the 150th anniversary of Confederation.

Janet Macpherson earned her Bachelor degree in philosophy from York University, and studied ceramics at Sheridan College. She holds an MFA with a focus on ceramics from The Ohio State University. Macpherson has received research and project grants from The Canada Council for the Arts, was named the winner of the 2013 Winifred Shantz Award for Ceramics, and was nominated for the RBC Emerging Artist People’s Choice Award in 2012. She was an artist-in-residence at Harbourfront Centre from 2011 to 2014 and recently completed an international residency at Zentrum fur Keramik in Berlin, Germany. Macpherson has shown her work extensively in Canada and the United States. She lives and works in Toronto.

All programs & events include exhibition admission.

Monday February 27, 6:30 – 8 pm
What Now: Thinking Through Canada 150
Presented in partnership with Canadian Art
David Balzer, Editor-in-Chief at Canadian Art magazine explores the problems and opportunities surrounding Canada 150: an event that could, and should, be as much about the future as the past.
$15 General; $10 Gardiner Friends
Learn more & get tickets

Sunday March 19, 11 am – 4 pm
Art + Feminism Wikipedia Edit-a-thon
Join us for a communal updating of Wikipedia entries on Canadian women, trans and/or gender non-conforming artists, scholars, and historians in art, craft, and design. The Edit-a-thon kicks off with a conversation on contemporary feminism, ceramics, and community featuring artists Janet Macpherson and Helen Cho, and moderated by curator Karine Tsoumis.
Free registration

Saturday April 29, 9 am – 12 pm
PiGEON Psycho-Geographic-ExcursION
The growth of dense urban areas poses a threat to migratory birds. This birding walk will be follow by a DIY paracord-string crafting demonstration as a preventive tool for bird-window collision. PiGEON also includes a brown bag lunch and admission to Janet Macpherson: A Canadian Bestiary.
$25 General; $20 Gardiner Friends
Learn more & get tickets

Wednesday May 17, 7 – 10 pm
Universe in a Glass: Film Screening and Q&A
Presented in partnership with Toronto Animated Image Society and Subtle Technologies, this screening of animated shorts explores the interconnectedness of all living beings on our planet through water. It will be followed by a Q&A.
$15 General; $10 Gardiner Friends and Toronto Animated Image Society Members. Free for Subtle Technologies pass holders.
Learn more & get tickets