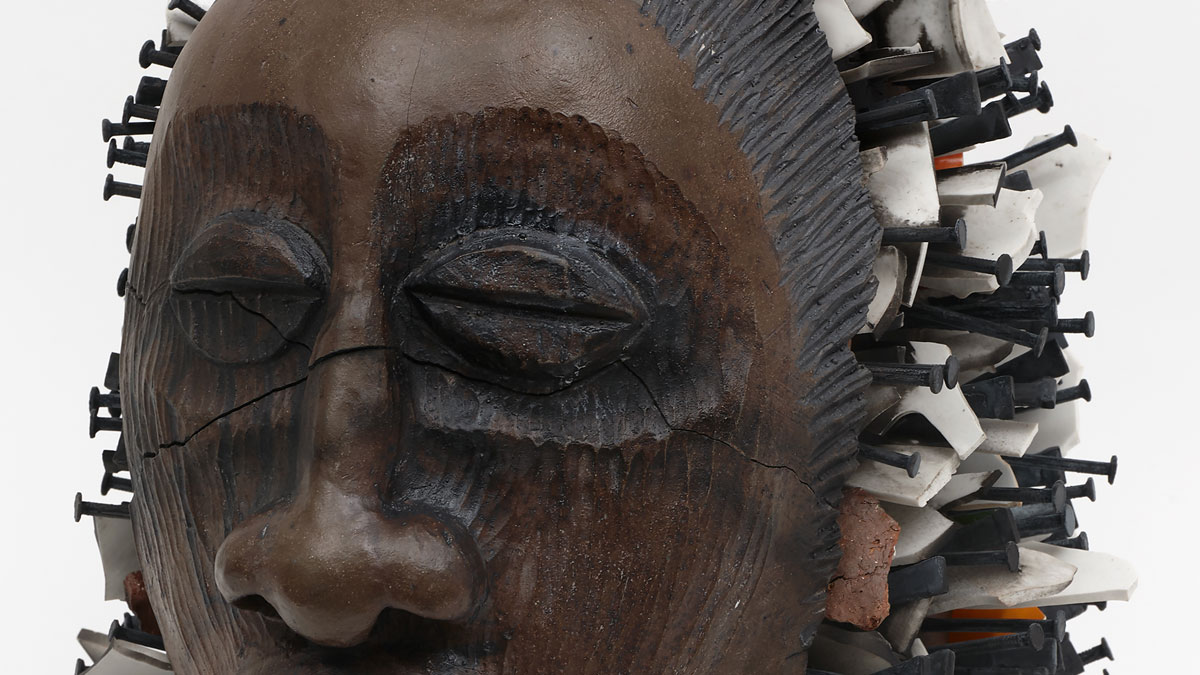 “I am inspired by folklore, functional pottery, modernism, natural history, and a lifelong affinity for West African and Oceanic sculpture. My works investigate the symbolic and formal properties of archetypal motifs, questioning how the meanings of icons, objects, and functions transform across cultures and over time.” – Sharif Bey

Sharif Bey works figuratively, often repurposing fragments of his own earlier sculptures to create beings with a sense of wonder, ritual, and ambiguity.

Bey’s works foreground African and Afro-diasporic aesthetic traditions. Central African power figures, or nkisi, and physiognomies emblematic of Blackness figure prominently, while other influences include ancient Andean ceramics and contemporary popular culture. Bey enlivens his forms with jutting nails, porcelain shards, and other inclusions, giving his figures an energetic presence. For Bey, the removal of nkisi and other historical artifacts from their cultures of origin represents colonial violence, but also an opportunity for speculation and wonder. What power do these objects hold? What were their original meanings?

Each sculpture is structured around a central pottery form. Bey’s works begin as hollow ceramic, often made on a wheel. To these pots, Bey may add a mask, legs, or lid, making explicit the connection between bodies and vessels, while rendering utility symbolic.

The shard, inclusion, and vessel come together to mirror the capacity for wonder found in historical artifacts removed from their cultures of origin. These works invite us to speculate forward, imagining the worlds and rituals they could embody.

Born as one of 12 children, Sharif Bey was raised in a large African American family in Pittsburgh. While many of the men in his family left school for jobs in industry, Bey had a pivotal experience at the Manchester Craftsmen’s Guild (MCG) while attending high school. MCG played a formative role for Bey throughout his teens, giving him a foundation of skills and extensive ceramics-world connections.

Shortly after the fall of the Soviet Union, Bey studied sculpture at The Academy of Fine Arts and Design in Bratislava, Slovakia. Later, he earned his BFA from Slippery Rock University, his MFA from the University of North Carolina at Greensboro, and PhD (in Art Education) from Pennsylvania State University. His awards include The United States Artist Fellowship, The Pollock-Krasner Fellowship, The New York Foundation for the Arts Fellowship, and The J. William Fulbright Scholarship.