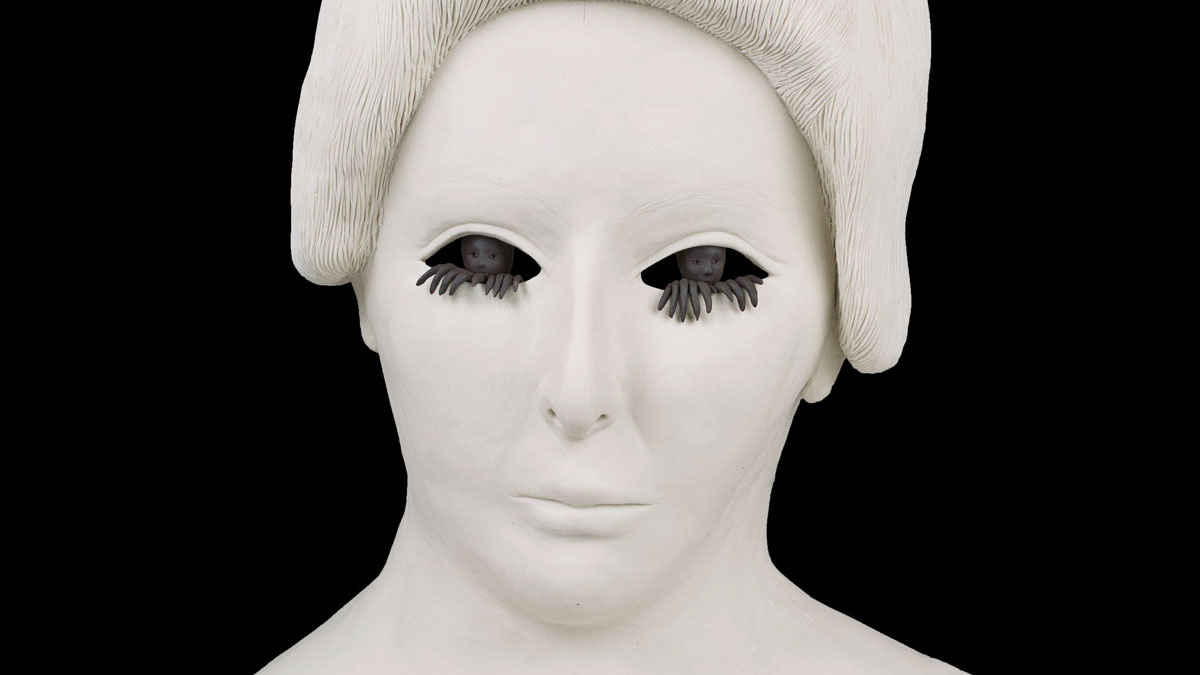 Outside the Palace of Me is a major exhibition of new work by Canadian visual artist and performer Shary Boyle. Borrowing a line from UK poet Kae Tempest’s 2017 song “Europe Is Lost,” Outside the Palace of Me assembles the artist’s ever-mounting anxieties about global crises, within the context of identity theatre. Reflecting on contemporary constructions of self through the language of costume, character, set design, and stage effects, Boyle explores how we see each other, and how we see ourselves.

In our evolving political and cultural reality, the distinction between personal integrity and public persona has become dangerously blurred. We are encouraged by social media to perform our brand for an invisible audience. Yet at the same time, role-playing and self-examination are essential tools to gain perspective on historical relationships. As global responses to racial and economic injustice, colonial violence, gender fluidity, and environmental crisis deepen and divide us, artists ask themselves: what is our responsibility for, and relationship to, dominant narratives? Is identity static, or something we shape and define, ever-moving, between us all?

Outside the Palace of Me is a multi-sensory installation including drawings, ceramic sculpture, life-sized automatons, two-way mirrors, and coin-operated sculpture, set to an interactive score. Reimagining the museum as a collective performance space, the artist worked closely with a scenic designer, robotics engineer, amusement park innovator, and costume artist to joyfully envision a set for humanity and imagination.

Boyle mines histories of craft and obsolete technologies to connect our current realities to legacies of the past. Revolving the stage on her uncanny characters and their destabilized audience, she urges viewers to think critically about how we create both ourselves and the world we inhabit.

Shary Boyle (b. 1972) is from the Scarborough area of Toronto. The recipient of a 2021 Honourary Doctorate of Fine Arts from her alma mater, Boyle graduated from the Ontario College of Art in 1994, developing a studio practice centered on figurative drawing, painting, and live performance. Creating deeply imaginative, idiosyncratic, and unsettling worlds, Boyle was an early innovator of live-drawing techniques using overhead projectors referencing shadow puppetry and cell animation. Boyle often collaborated with musicians and artists of other disciplines for these performances, activating her practice with a characteristically inclusive spirit.

Boyle began making sculpture in the late 1990s, modelling small polymer clay figures. Seemingly naïve and otherworldly, these flesh-like works incorporated fantastical imagery and often had an explicitly sexual aspect. She began working with ceramics in 2002, following a workshop on cast porcelain figurines and lace draping, approaches typically associated with elderly hobbyists. Boyle began researching the European history of the porcelain figurine, critically appraising its Enlightenment roots. The resulting works, exhibited at Toronto’s The Power Plant Contemporary Art Gallery in 2006, balanced highly refined and seductive surfaces with startling, sometimes disturbing imagery: a noblewoman holding her own bloody head in her hands, a lady consumed by delicate blossoms, a reclining damsel with an arching ouroboros of heads terminating between her legs.

Shary Boyle continues to work in sculpture, installation, drawing, and performance. Her multidisciplinary artworks were the subject of a major touring exhibition, Shary Boyle: Flesh and Blood in 2010–2011. She represented Canada at the 55th Venice Biennale in 2013 with Music for Silence,  and co-curated the collaborative touring project Earthlings in 2017. Boyle has performed and exhibited extensively, from Los

Angeles, New York, Paris, and Icheon, South Korea, to remote communities such as Dawson City, Yukon Territory, and Inuvik, Northwest Territories. Her work is widely represented in private and institutional collections, including the National Gallery of Canada, the Art Gallery of Ontario, the Montreal Museum of Fine Arts, and the Gardiner Museum.

Free docent tours are offered Saturdays and Sundays at 2 pm.

Wednesday March 16, 6 – 9 pm
Public Celebration
Join us for a free public celebration of the exhibition with the artist in attendance.

Saturday April 2, 1 – 4 pm (drop in)
Slow Art Day
Join Education Manager Farrukh Rafiq to reflect on some of the social, political, and environmental themes explored in the exhibition. Free with admission.

Entry to the special exhibition is included with general admission. Tickets can also be purchased at the Front Desk upon arrival.