In anticipation of their upcoming Gardiner Shop exhibition in November, we visited the shared studio of artists Nurielle Stern and Shay Salehi in Artscape’s Case Goods Warehouse. Located in the heart of Toronto’s Distillery District, the warehouse was purpose-built in 1926 to store cases of whiskey destined for export during the prohibition era. Now it’s home to four stories of work and retail studios, offices, and rehearsal and performance spaces, including Nurielle and Shay’s top-floor digs.

Nurielle has been in the space for two years now, having set it up as a ceramics studio with kilns and a spraybooth. After meeting through a mutual friend from Sheridan College, Nurielle began sharing the space with Shay, whose glasswork relies on much of the same equipment. While the results are strikingly different, and their opposite schedules mean that they seldom cross paths (Shay is at the studio early while Nurielle tends to work late), both artists value the opportunity to show the other what they’re working on.

“It’s nice because we get the privacy of our own studio,” says Shay. “You want it to be quiet when you first come in, but we also get the benefit of sharing our work and getting the other’s opinion. I get advice from Nurielle all the time.” 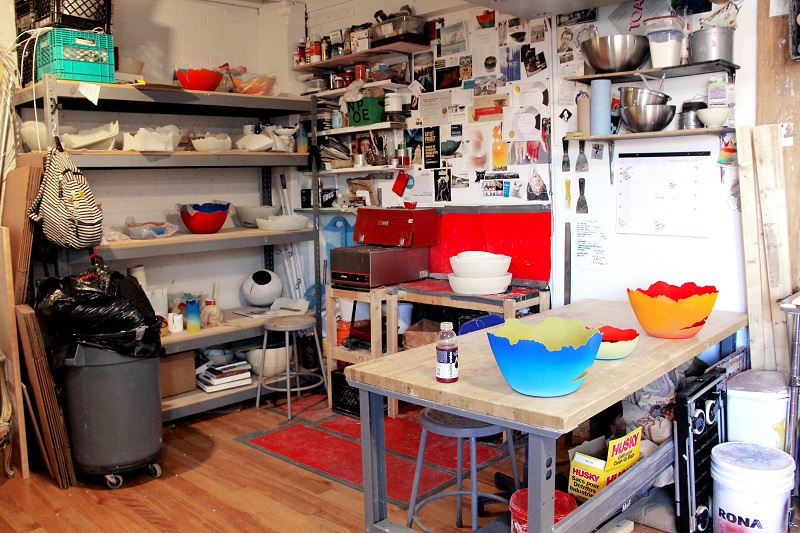 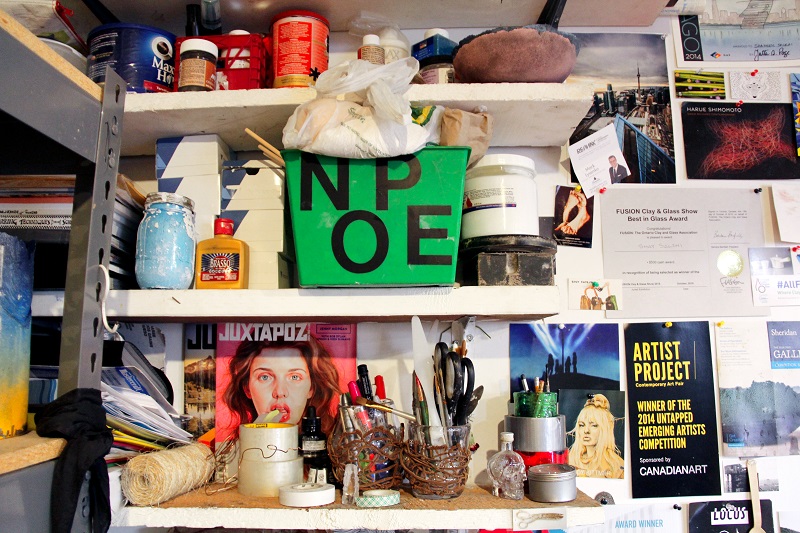 Shay’s bowls, in different states of finish, line the shelves in her section of the studio. They’re made of glass beads—the same ones used to give paved roadways their reflective quality—mixed with water and wallpaper glue, then packed into ceramic forms and filled with sand before they’re fired in the kiln. “It’s glass, but it’s not as predicable. It’s a bit more mysterious in how it fires.” She explains. 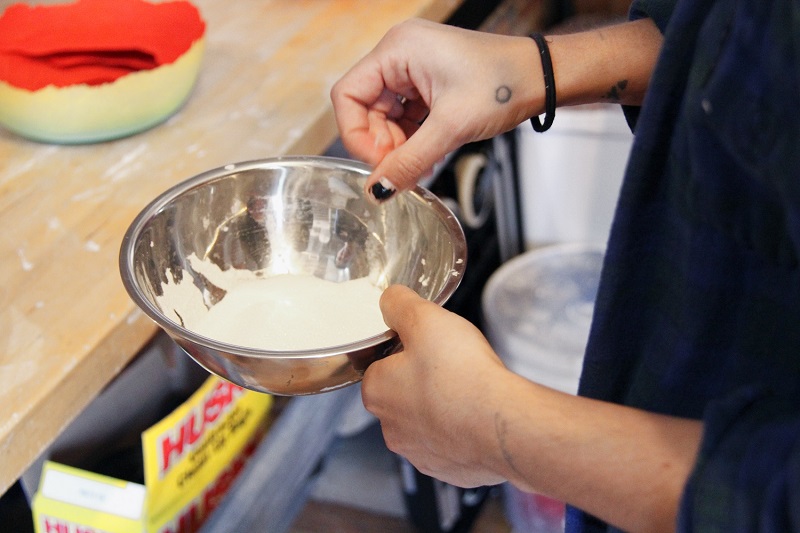 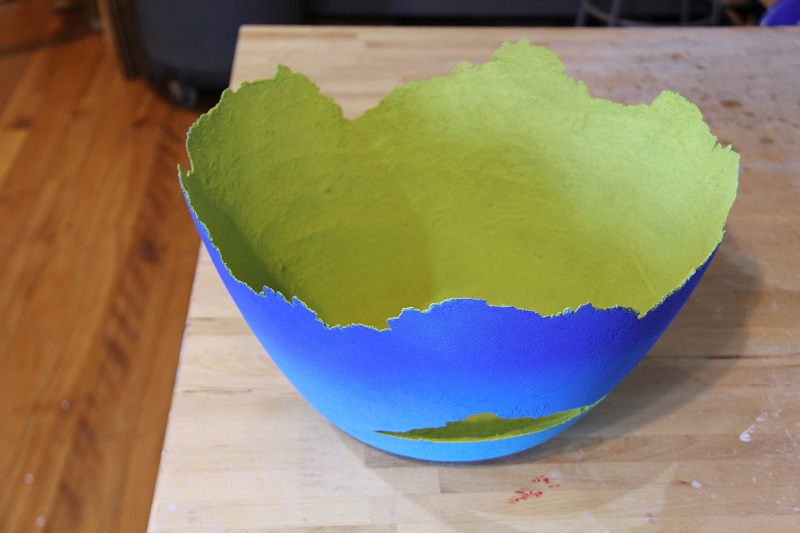 To achieve the jewel-like colours that make her bowls so distinctive, Shay uses spray paint. “When I first started doing this body of work, I was using a lot of darker, earthier tones, but I shifted over last year to brighter colours, and I think I enjoy that more. It’s often based on my mood.” 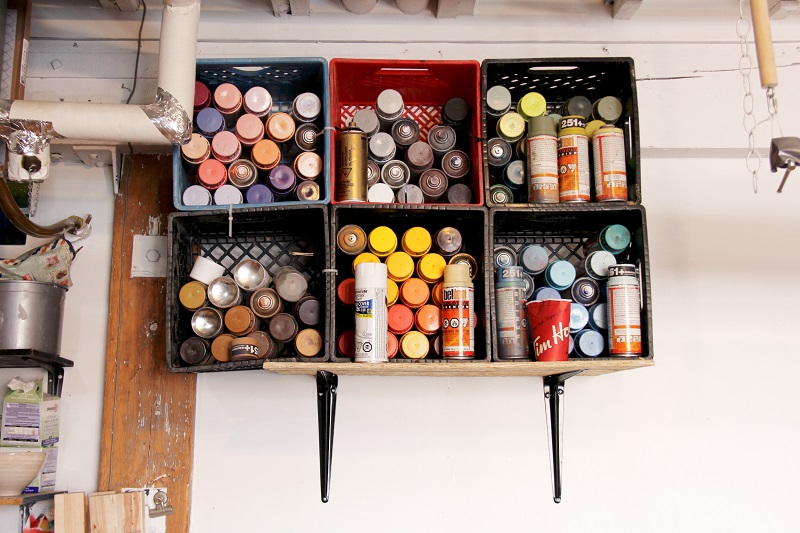 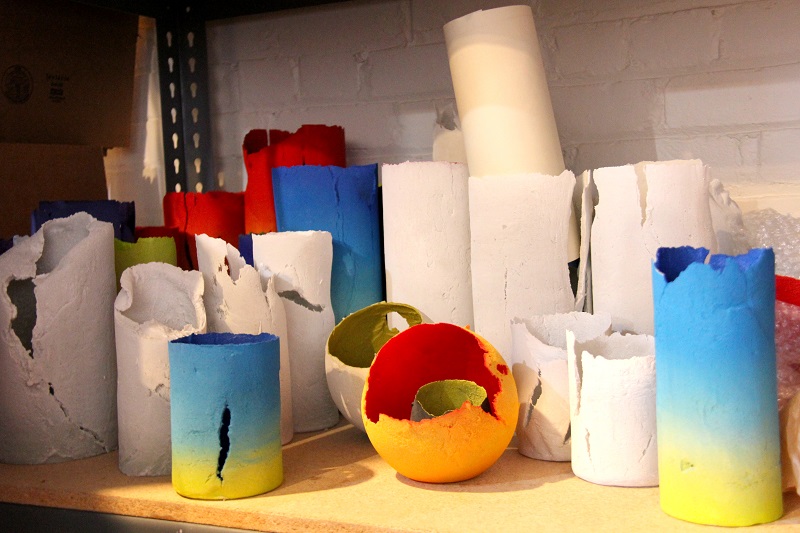 On the opposite side of the studio, Nurielle’s space is filled with artifacts from past projects, including a pair of ceramic ice skates from her 2015 Nuit Blanche installation at the Gardiner, as well as a conspicuous amount of cat-related imagery—a recurring theme in her work. It all started with a drawing, still hanging in the studio, and a friend’s suggestion that she try using clay to create the appearance of fur. “I like to make impossible things. Like really impossible,” she explains. “I did all these tests to figure out how to make ceramic look furry since it’s so fragile and sharp. It took months.” 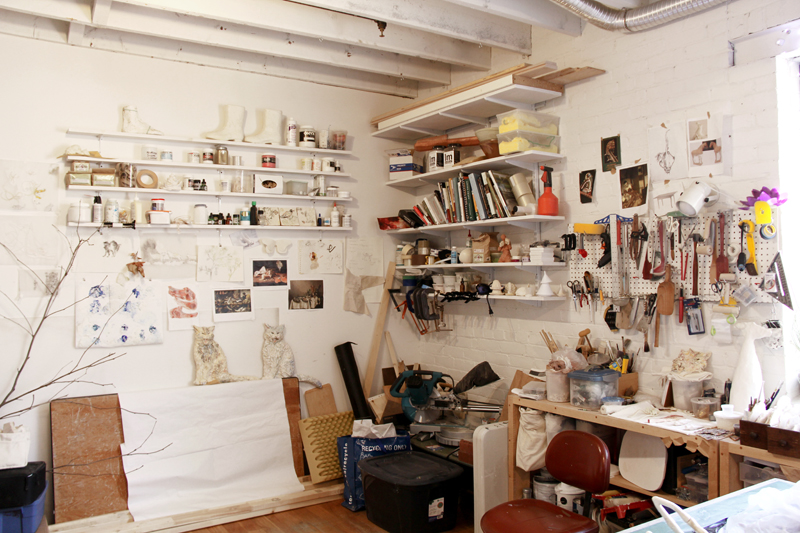 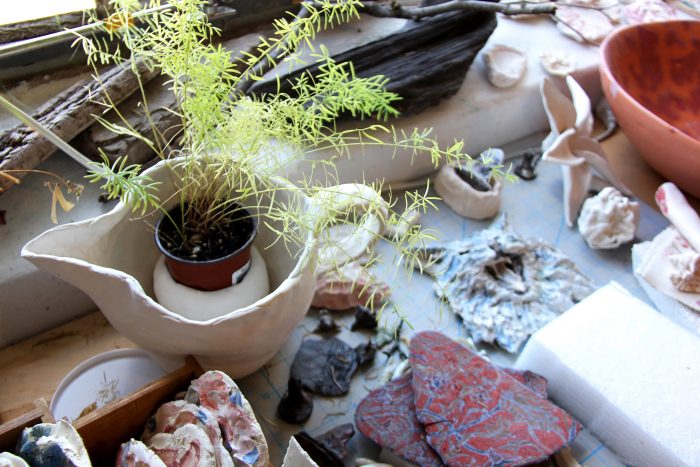 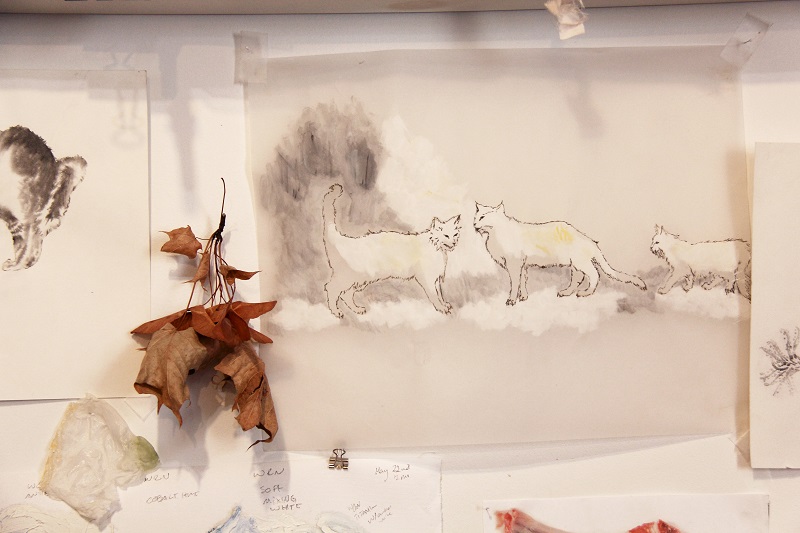 This kind of contradiction features prominently in Nurielle’s practice. “A lot of my work combines things you would find indoors and things you would find in the wilderness.” she says. There’s evidence of this in the studio—in one corner, a large tree branch lies by the skeleton of a couch, which Nurielle has de-upholstered. She’s planning on combining the two for an installation in the style of a theatre set, which will also incorporate her trademark ceramic cats. 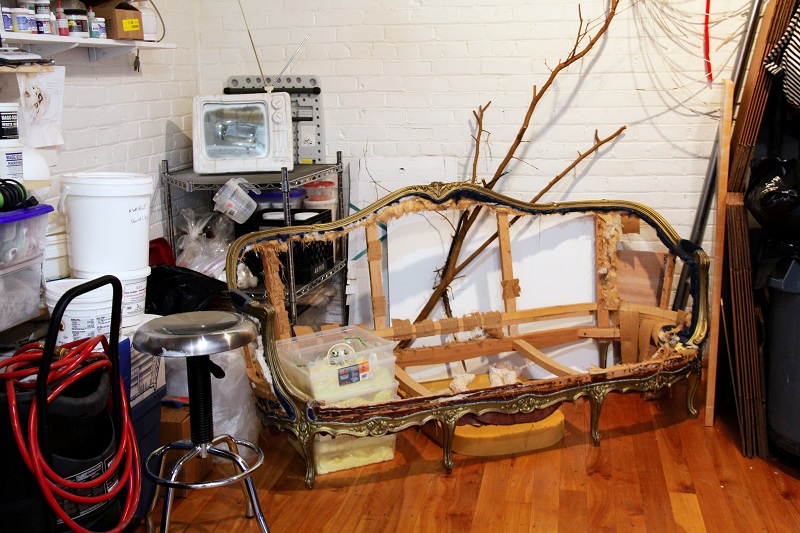 Nurielle’s work is also heavily influenced by her knowledge of history, and she’s very much aware of how perceptions about ceramics are shifting. “For the longest time ceramics was considered a lowly material. Nobody would touch it. That’s changing, but it’s still kind of a new artistic medium. It just has so much potential. You can do almost anything. You can achieve any kind of look, surface, or shape.”

To conclude our visit, we asked Shay and Nurielle how they see each other’s work and what they’re focusing on now.

How would you describe each other’s artistic practice?

N: I would say that Shay creates sculptural objects that are both bowls and landscapes in that they transform as you move around them, so you can have these shifting perspectives. She uses all these wonderful vibrant colours. Her work really glows.

S: I talk about Nurielle all the time. I would say that she’s a ceramist who makes sculpture. I’m studying at OCAD for sculpture installation, and Nurielle went there for sculpture installation too. I’m following in her footsteps! Her work also matches her personality. I’ve been here for a year and a half now and I’ve gotten to know her on an intimate level, and can definitely see a relationship between what she makes and how she is as a person. I also tell people that she’s smart—she knows everything.

Aside from preparing for the Gardiner Shop exhibition, what are you each working on?

S: I’ve been slowing down because I’m in school. I’m applying for less and just taking time to experiment. I’ll probably apply for a couple things at the end of the school year to keep myself busy, but right now, I’m just focusing on balancing school and work.

N: I’m also trying to slow down with applications, and I’m experimenting with a new way of working. Until now, I’ve been making 3D objects, but I feel like ceramics has so much in common with painting, so I’m trying to mesh them. I’ve been doing all these tests, putting glaze directly on wet clay, and being really loose with the application of colour and seeing where that takes me. It’s a new direction. I think it’s important that I keep changing and growing my work, so I don’t just fall into old habits.

Shay Salehi and Nurielle Stern are November’s Gardiner Shop exhibiting artists. Join us for a meet and greet with the artists on November 9 at 3:30 pm, followed by an artist talk with Nurielle Stern. Learn more here.