Inside Savour: A tour with designer Gerard Gauci 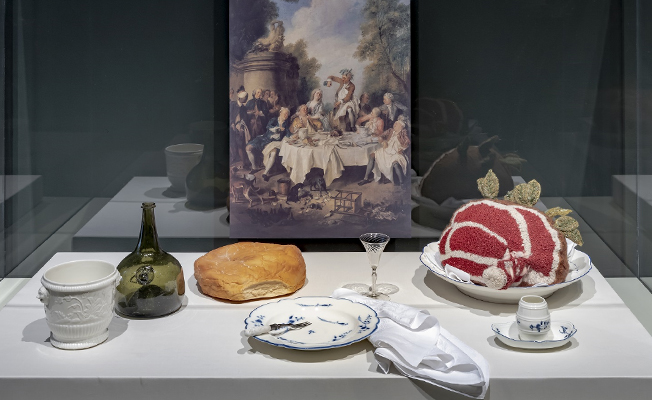 Designed by Gerard Gauci, resident set designer at Opera Atelier, Savour: Food Culture in the Age of Enlightenment is an immersive exhibition that takes you from the lush gardens at Versailles to the steamy kitchens of cooks who advocated light, flavourful cuisine centuries before our time. Here, Gerard tells us about designing this delectable exhibition and walks us through some of his favourite scenes. 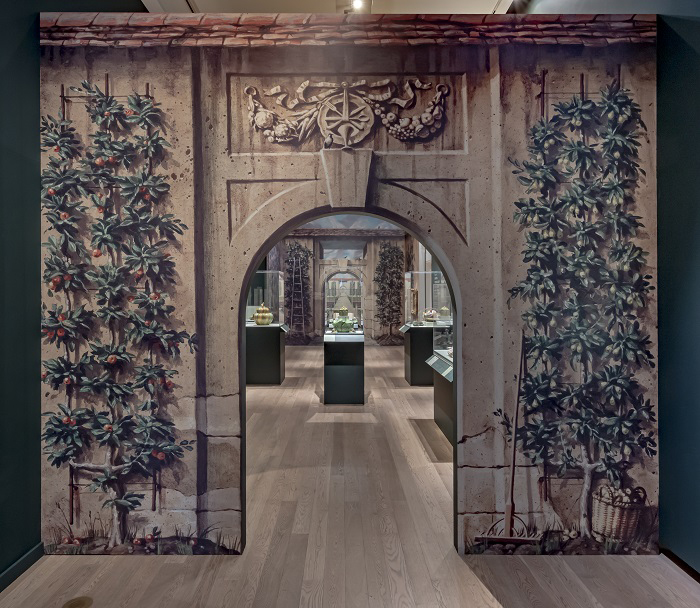 My job as a set designer is to create storytelling environments that give the audience a sense of where a character happens to be. A challenge with this exhibition was designing around many small objects within a giant space. The gallery was an empty canvas so I decided to divide it up into a beginning, middle, and end. I think of an exhibition as a theatrical event and I’m always looking for a narrative. In this instance, curator Meredith Chilton was telling a story about food in a very particular period, including developments in food production, cooking, serving, styles of dining, and so on. We decided to create a spatial narrative that took visitors from one place to another. Once we determined that, then it became about storytelling and giving the pieces themselves context. 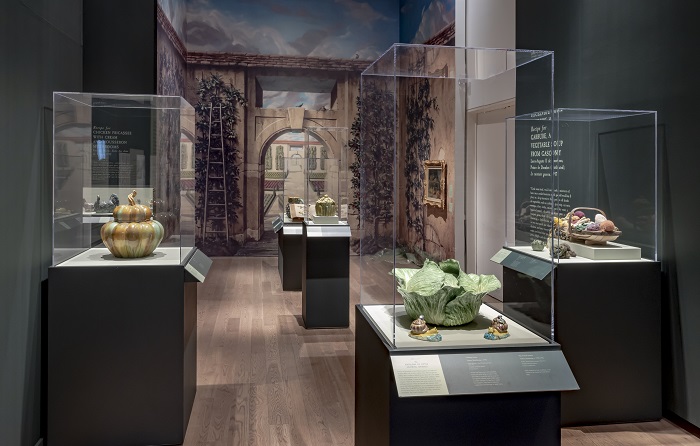 In the first room, you’re looking through an archway that was inspired by the kitchen gardens at Versailles. The first thing you see is a life-sized porcelain cabbage tureen that brings the scene to life. 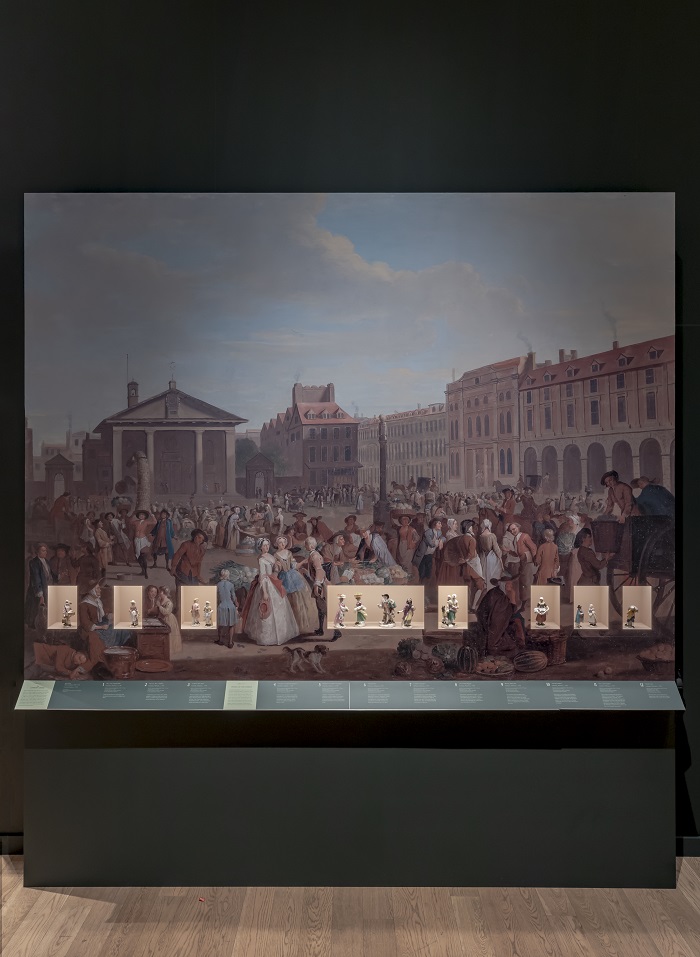 In the marketplace section, visitors will see a group of small figures known as London Criers, sellers who often yelled over each other to get the attention of shoppers. For this collection of lovely figurines, I found myself asking ‘how can we understand them?’ Here, we took a painting of a marketplace in Covent Garden in the 18th century and essentially inserted the figures into the painting so they populate the image. To further bring the scene to life, there is a listening station where people can put on headphones and listen to the sellers’ cries. 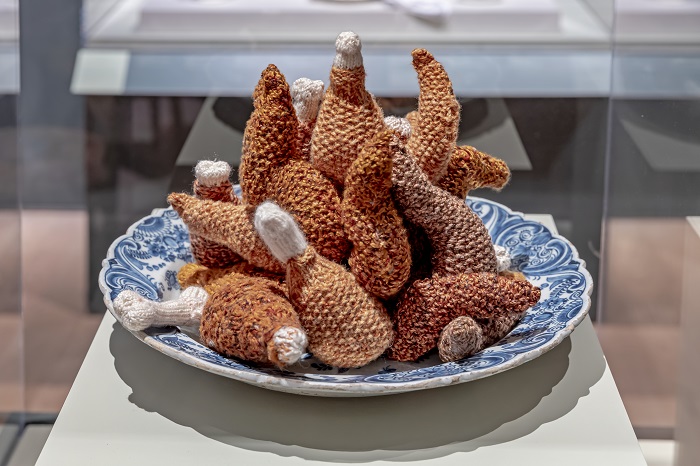 The pantry is where all the serving pieces are stored, and those pieces tell their own stories about which foods were popular in that period. Serving pieces were not just about presentation either, but functioned to keep food hot. The addition of knitted works by Madame Tricot allows visitors to see how these serving pieces might have been used. 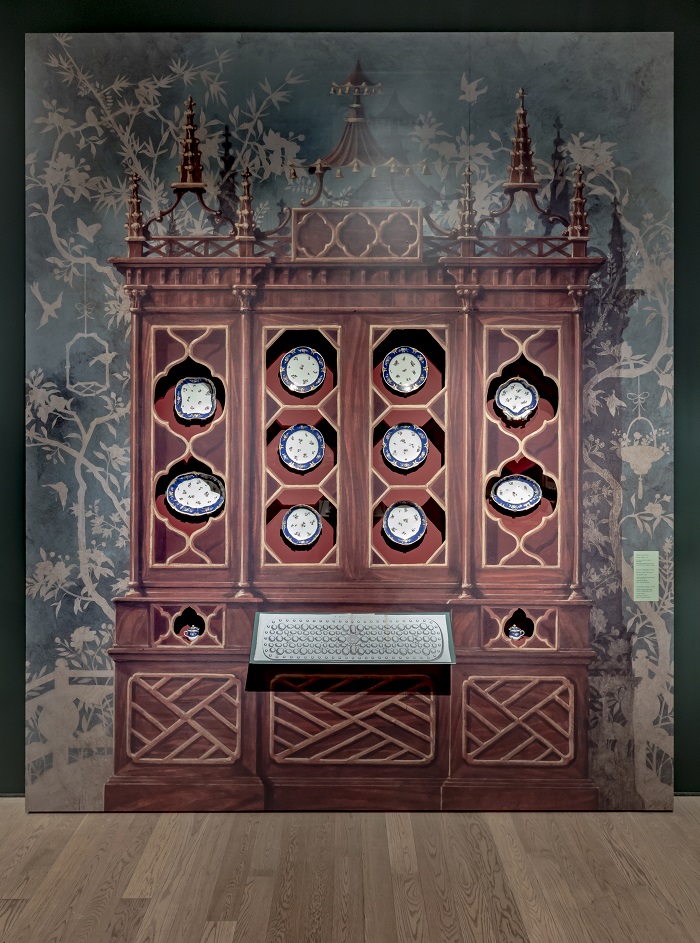 One of the highlights of the pantry section is the cabinet. Meredith borrowed a beautiful partial set of 18th-century Sèvres porcelain and wanted a formal arrangement of this service. In museums, you often see beautiful arrangements hung on a wall or even reproductions of table settings hung on a wall, but the challenge here was to try and devise something that I hadn’t already seen. I’m not a builder, but I am a painter, so I decided to paint a piece of furniture that would house the porcelain. 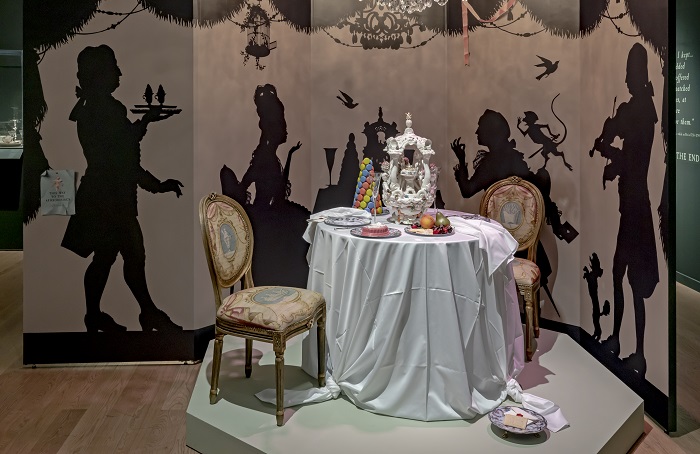 In the final section, Meredith wanted to tell stories about changes that were taking place in the ways that people dined in Europe. Dining before this period was a very public experience, and this is the era where intimacy in dining started to become popular. In this dinner scene, stories are being told through the furnishings. 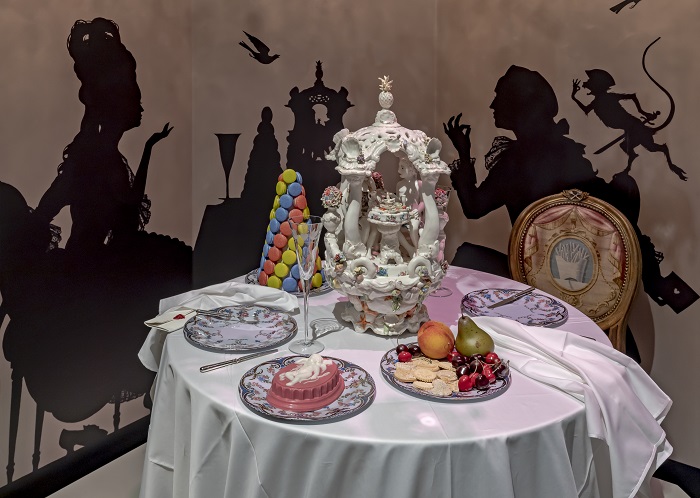 I wanted to include chairs as part of the dining set and found some Louis XVI reproductions. I thought I could turn them into pieces of art that would say something about food in the 18th century as well as today. The design is inspired by Robert Adam, who was a great English architect of the period. I wanted to play with the idea of contemporary food, somehow integrating it with period furniture. I took the chairs and embellished them with cartouches of a fork, a knife, and a plate, and then painted them in two different ways. The first chair I call the Sundae Chair and the second is the Fast Food Chair, which is decorated with images of French fries, a burger, and a coke. At a distance, both look like period chairs. It’s only when you get closer that you see that they’re having fun and making an amusing visual link between food in the 18th century and food today.

Savour: Food Culture in the Age of Enlightenment takes you on an immersive journey through the gardens, kitchens, pantries, and dining rooms of 18th century France and England. 18th-century objects mingle with contemporary ceramics and glass, whimsical knitted foods, and theatrical sets. It’s truly a feast for the eyes—with lots of surprises in store! Learn more

Images: Installation shots of Savour: Food Culture in the Age of Enlightenment, 2019. Photography by Toni Hafkenscheid